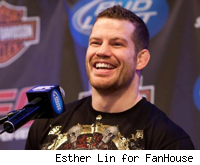 Nate Marquardt was one win away from realizing his goal of fighting Anderson Silva for the middleweight title again. All he had to do was beat Chael Sonnen at UFC 109.

Of course, things didn't go as planned for Marquardt, who lost to Sonnen via unanimous decision.

That loss hasn't necessarily knocked Marquardt all the way down the 185-pound ladder (Sonnen's performance at UFC 117 might have softened the blow in the eyes of MMA pundits), but in order to remain in the mix, he must get by Rousimar Palhares at UFC Fight Night 22 on Sept. 15.

And believe it or not, Marquardt is walking into this fight with the memory of his loss to Sonnen firmly cemented in his mind.

"I guess I'm still not over the heartbreak or whatever," Marquardt said on Monday's edition of The MMA Hour. "It still bothers me, but I'm definitely looking forward to my next fight and I feel I've learned my lessons from that fight. I expect to go into this fight and execute my game plan, and I think that's one of the biggest mistakes that I made against Chael."

And what were the lessons Marquardt learned last February?

"There's a few technical things and possibly a few things in my training that I had to change or had to tweak, but really the main thing is I don't feel I followed my game plan to fight a wrestler. If you fight a wrestler the wrong way, it's very easy to get taken down, and I think that's what happened. My takedown defense is much better than I showed, and I will be able to prove that in my next fight here."

Marquardt vs. Palhares was supposed to take place at UFC 118, but once Alan Belcher had to pull out of the UFN 22 main event against Demian Maia, the UFC bumped the fight to main event status on Spike TV.

"It was a blessing," Marquardt said of the switch. "Going from just somebody on the card to the main event is huge. I think the two extra weeks is only going to help me."

Palhares walks into this fight riding a three-fight winning streak. He's 4-1 in the UFC and is coming off a dominant, yet controversial win over Tomasz Drwal.

In that UFC 111 fight, Palhares was accused of holding onto a submission heel-hook long after Drwal tapped. It looked reckless and irresponsible and added more fuel to the fire that the Brazilian was a "dirty" fighter.

Marquardt has heard these claims and said he is ready for whatever Palhares decides to throw at him.

"I've heard that, that he holds on to stuff too long, but I don't really care about that. When I go to fight, I fully expect guys to do whatever they can to win, and if that means them trying to cheat or whatever, you have to be ready for that. You have to protect yourself at all times and that means even from things that are illegal. I'm going to come prepared and I'm going to do my best to stay out of any kind of submission hold so that issue won't even come up."

When asked whether he would have been upset had Vitor Belfort, who has never won a middleweight fight in the UFC, gotten a title shot before him, Marquardt said he doesn't pay attention to the politics involved in title shots.

Belfort, of course, was supposed to fight Silva for the belt at UFC 112, but a shoulder injury forced him to pull out. He is now rumored to be fighting Yushin Okami in November, while Sonnen gets another crack at Silva early next year.

Marquardt, who lost to Silva in a title fight at UFC 73, did say, though, that even if his critics remain vocal over the fact that he has a lot of work to do before getting another title shot, he is confident that he will eventually prove to them that he is worthy of dancing with the champion once again.

"I don't worry too much about that kind of stuff, like, who's getting a title shot or who's fighting who. I really just try to stay focused on what I'm doing and who I'm fighting. You know, like I said, when it's my time, I'm going to get the shot. When you deserve the shot, eventually they can't deny you.

"Look at a guy like Gray Maynard. He's beaten everybody. I think he's undefeated, I believe, and they really held off giving him the shot. But he won his last fight and now they can't really deny."