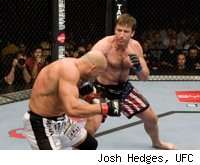 Stephan Bonnar, the light heavyweight who became an MMA household name after his epic fight with Forrest Griffin on the season finale of the first season of "The Ultimate Fighter," will once again fight on a TUF card.

Sources close to Bonnar's camp confirmed to MMA Fighting on Saturday that he has been offered a fight against Croatian Igor Pokrajac for the TUF 12 finale and has verbally agreed to the bout, though contracts have not yet been signed.

The TUF 12 finale, though not officially announced by the UFC, is expected to take place at The Pearl at The Palms Resort Casino in Las Vegas on Dec. 4. Season 12 of the UFC's reality competition features 28 lightweight fighters and debuts on Sept. 15 with welterweight champion Georges St-Pierre and Josh Koscheck as coaches.

Bonnar (15-7, 6-6 UFC) broke a three-fight losing streak in July – the longest skid of his fighting career – with a second-round TKO of Krzysztof Soszynski at UFC 116. That win avenged a controversial TKO loss to Soszynski at UFC 110 in February when Bonnar was cut from an accidental headbutt. He appealed the decision, but was unsuccessful. His win over Soszynski in the rematch was awarded a $75,000 Fight of the Night bonus.

Pokrajac (22-7, 1-2 UFC), who has long been one of the main training partners of Mirko "Cro Cop" Filipovic, is coming off his first UFC win after opening his stint in the promotion with back-to-back losses to Vladimir Matyushenko and James Te-Huna. Pokrajac submitted James Irvin with a first-round rear naked choke at UFC Live on Versus 2 last month in San Diego.

Bonnar will make his first live appearance on Spike since UFC Fight Night 5 in June 2006 against Rashad Evans. After his close decision loss to Griffin on the TUF 1 finale, which also earned him a UFC deal, Bonnar fought on four straight Fight Nights on the network.