Shine Fights Forced to Move Tourney From Virginia to Oklahoma 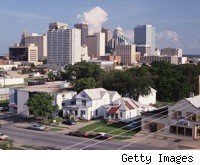 Just a week before its lightweight grand prix tournament, Shine Fights has had to make a fairly major change in plans.

The promotion had a one-night, eight-man lightweight tournament planned for Sept. 10 at the Patriot Center on the George Mason University campus in Fairfax, Va. But MMA Fighting has learned that though the tournament will still go on, Shine will pack up camp and move the event to Oklahoma. The exact location and venue is not yet known.

According to a source close to the promotion, the issue at the heart of the move was a marketing push by Shine that gave fans the opportunity to choose the matchups for the first-round bouts in the tournament. That apparently didn't sit well with Virginia's commission, which operates under the Virginia Department of Professional and Occupational Regulation. The commission wouldn't issue Shine a license because of the fan matchmaking, the source said.

So the promotion had to seek a state that would sanction the tournament, given the unique situation of the promotion letting the fans play matchmaker, and a new venue. Shine's official website still had the event listed for Virginia as of Saturday morning, along with a link to purchase tickets.

The single-night, eight-man tournament will be the first such event by a major promotion in the U.S. in years. Strikeforce recently planned a four-man, one-night middleweight title tourney for its Houston card, but Texas rules don't allow elimination tournaments and the promotion had to hold off on the idea for a future show. The promotion held a four-woman tournament in Phoenix last month. But eight fighters in the brackets, as Shine has planned, means three fights in one night to win the event, which for major promotions in the U.S. hasn't happened since the early days of the UFC.

It was reported earlier this week that Drew Fickett would meet Charles "Krazy Horse" Bennett as one of the first-round match combinations picked by fans. According to the source, that bout will still take place, though Shine has not yet announced other first-round matchups.

Also in the tournament are UFC veterans Rich Crunkilton and Marcus Aurelio, WEC vet Carlo Prater, James Prater and Dennis Bermudez. Josh Shockley is still listed on Shine's site as one of the tourney's competitors, but Shockley confirmed to MMA Fighting that he had to pull out of the event with an injury, leaving Shine searching for a replacement for his slot.

This is not the first time Shine Fights has run into an 11th-hour complication. In May, the promotion had its first pay-per-view event scheduled, featuring UFC veteran Din Thomas against boxer Ricardo Mayorga. But the plug was pulled on the day of the event after Don King, Mayorga's boxing promoter, fought in court to keep him from fighting. And after he was successful, the North Carolina commission elected to scrap the event entirely, reportedly because Shine did not meet the state's requirements for regulation.

After its May debacle, Shine Fights made Jason Chambers, a former fighter, Bellator analyst and actor, its new COO. The lightweight grand prix tournament is scheduled to air on pay-per-view for $29.99 and will be the promotion's first such venture.