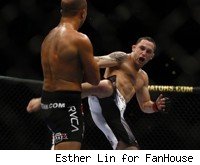 With his second straight unanimous decision loss to Frankie Edgar, B.J. Penn is no longer one of the top 10 pound-for-pound fighters in the world.

He's long been considered one of the truly elite fighters in mixed martial arts, but the soon-to-be 32-year-old Penn has looked in his two fights this year like he has slowed down. Penn is the greatest lightweight ever to fight in MMA, but even the greatest decline eventually.

So Penn isn't in my pound-for-pound Top 10 anymore. To find out who is, read on.

1. Georges St. Pierre (1): The best in the sport will get a major publicity boost for the rest of the year, first coaching on The Ultimate Fighter and then fighting Josh Koscheck in front of his hometown fans in Montreal.

2. Jose Aldo (2): The biggest fight of September will take place on the last day of the month, when Aldo fights Manny Gamburyan for the World Extreme Cagefighting featherweight title at WEC 51. I've always liked Gamburyan and think he has looked reborn since dropping down to featherweight, but I have a tough time seeing him hanging with Aldo.

3. Anderson Silva (3): Chael Sonnen demonstrated that Silva is far from invincible, while Silva demonstrated that he can find a way to win even when it's not his night. Now we're going to have to wait several months to see them fight again.

4. Shogun Rua (4): Currently sidelined by a knee injury, Rua is talking about defending his light heavyweight title for the first time early next year. I want to see Rua back in the Octagon soon, but I also hope he takes his time and recovers fully -- it would be a shame to see his bad knees cut his career short.

6. Dominick Cruz (6): Cruz just methodically dominates everyone he fights. It appears that Scott Jorgensen will be next for Cruz, but I'm more interested in potential future fights with Urijah Faber, Miguel Torres and Brian Bowles, which all have the potential to inject some energy into the bantamweight division.

7. Lyoto Machida (7): He's expected to get Rampage Jackson this year, in a fight that would be tailor made for showcasing Machida's skills. If Machida wins that fight he'll be firmly established as the No. 2 light heavyweight in the world, although I don't think too many people will be clamoring for a third fight with Shogun.

8. Rashad Evans (8): A long layoff is coming for Evans, who will wait as long as it takes for Shogun to get healthy. I'd prefer to see him fight someone in the interim to help sort out the light heavyweight division, but Evans wants his title shot.

9. Joseph Benavidez (9): One of these days the WEC will get around to implementing a 125-pound class, and Benavidez will be able to fight opponents his own size. When that happens, I expect Benavidez to wear the belt.

10. Gray Maynard (not ranked): It's hard to argue against a guy who's undefeated and has beaten the current champion of his weight class, as Maynard has. Of course, it's also fair to point out that Maynard lost to Nate Diaz on The Ultimate Fighter and had a no contest against Rob Emberson on that season's Ultimate Fighter Finale, so it's not like his record is perfect. But Maynard has beaten everyone he's fought since the Emerson fight, including a one-sided unanimous decision win over Edgar, and after beating Kenny Florian at UFC 118, he moves into the pound-for-pound rankings for the first time.