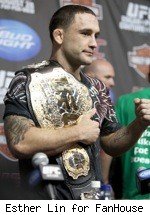 Chael Sonnen almost shocked the MMA world at UFC 117 when he came minutes away from snatching the middleweight title belt from Anderson Silva. Of course, his near-perfect performance ended in heartbreak when he was submitted in the late stages of the fifth round.

We'll know later next year if Sonnen learned anything from that night in Oakland, Calif., but one thing's for certain: thousands of miles away in New Jersey, Frankie Edgar, the UFC lightweight champion who was gearing up to defend his title against BJ Penn just three weeks later, learned a valuable lesson while watching Sonnen's loss to Silva.

"I learned some stuff from Chael that night," Edgar said on Monday's edition of The MMA Hour. "He was just constant pressure and didn't give Anderson a chance to breathe except for that one second that he got caught in the triangle. So I kind of tried to learn from that; to put the pressure on but don't be reckless while you are doing so."

Unlike Sonnen, Edgar fought the perfect fight at UFC 118. He dominated Penn for five full rounds and proved that his UFC 112 win over "The Prodigy" was no fluke after all.

Next for the 28-year-old is a rematch against the only man to ever beat him: Gray Maynard.

"The Bully" scored a unanimous decision win over Edgar at UFN 13 in April 2008. And while Edgar knows Maynard has improved since that fight (Maynard has won five in a row since then), he also maintains he is a different fighter too.

And given his past two performances, it's hard to argue with him.

Either way, Edgar couldn't have written a better script for himself.

"You can't ask for anything better. My second title defense against the guy that beat me. It's a chance at possibly righting a wrong."

The UFC has main events booked up until UFC 124: St-Pierre vs. Koscheck II. Silva vs. Sonnen II is expected to headline the organization's traditional Super Bowl weekend show in February.

So that leaves a possible Jan. 1 title defense for Edgar at UFC 125. Still, the champion has yet to decide when he wants to fight next.

"I really haven't decided, to be honest with you. I just had a newborn in this training camp, so I really didn't get a chance to enjoy my new addition. But not too, too long. I don't want to wait too long. End of 2010, maybe early 2011."

Critics of both Edgar and Maynard have said this past week that both fighters don't have the personality or fighting style to carry their own pay-per-view. Don't expect Edgar to drastically change his style, in and out of the cage, now, though. Not after just beating arguably the best lightweight ever. Again.

"I'm going to stick with this. I'm not going to change the person that I am for anything. But I am sure I can improve in that area [personality] too. I want to be an all-around complete fighter, and that includes this side of the game too."

As for his newfound fame, Edgar is warming up to being in the spotlight and recognizes that developing his personality -- perhaps another lesson learned from Sonnen -- is all part of being a champion.

"I'm taking it in stride. You know me, I'm not the most outgoing or flashy kind of guy, but it's part of it and I'm embracing it, for sure."

(Ed. note: Watch the latest edition of The MMA Hour below. Click here for this week's lineup.)