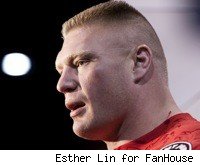 The UFC 121 main event between Brock Lesnar and Cain Velasquez is expected to be one of the most anticipated UFC fights of the year, and the organization is ensuring it will receive the full promotional push.

UFC announced on it's weekly Ultimate Insider show Thursday that a three-part Primetime series will air on Spike TV in the weeks leading up to the fight.

The series will debut on Wednesday, Oct. 6, at 11 pm ET/PT, and subsequent episodes will air on Oct. 13 and Oct. 20 on the cable network.

UFC 121 will take place on Oct. 23 from the Honda Center in Anaheim, Calif.

This will mark the fourth Primetime series produced by the UFC. Other fights featured have been Georges St-Pierre vs. BJ Penn II, St-Pierre vs. Dan Hardy and Rashad Evans vs. Quinton "Rampage" Jackson.

The highest-rated episode in Primetime history was the debut episode of Evans vs. Jackson, which drew 1.2 million viewers.