The Truth About Choosing Your Fights 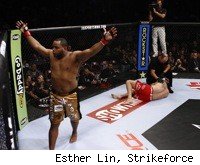 Chances are you've witnessed this scene before. A victorious fighter, flush with adrenaline, steps up to the mic for a post-fight interview. His face is lit up like a full moon and, at least in that triumphant moment, anything seems possible. He's just cold-clocked a qualified competitor on national TV. He feels like a giant among ants.

He's Julius Caesar. He's Alexander the Great. Conqueror of kingdoms and destroyer of worlds. So is it any surprise what he says when asked who he'd like to face next?

'I'll fight anybody they put in front of me.'

Really? Anybody? Because – and don't take this the wrong way, guy with only two or three UFC fights under his belt – 'anybody' covers a lot of territory. A lot of very, very dangerous territory.

And yet, to hear the fighters tell it, they've never turned down a fight. Not ever. Merely suggesting otherwise is enough to make you their enemy for life. But the thinking fan has to wonder, aren't there times when it's smart to turn down a fight? Isn't it sometimes better to know your own limitations, particularly early in your career?

"Fighters, at the beginning of their career, have no clue," said world-renowned MMA trainer Pat Miletich. "They don't know who they should say no to, so they need some help."

One such fighter – or at least one who can admit it now that several years have passed since that point, is Mike Swick, who freely admits he had to be talked out of taking some fights that might have been a bad idea back when he was a young fighter with more enthusiasm than experience.
Like tossing a bunch of meat into a pit of lions. No one wants to be seen as the guy who is shying away from anything.
-- Daniel Cormier
"I had a couple times in the beginning of my career when I first moved to AKA, where they didn't want me to take a fight that I thought I could win," Swick said. "It was tough hearing that and agreeing with that, but looking back it was tough guys before they were known. It was guys who were better than I probably thought they were. I was just being egotistical about it."

The hard part is, it's difficult for a fighter to maintain the necessary mindset for his line of work without verging into egotism. If you don't think you can beat anyone you're put in the cage with, what are you doing there in the first place? But if you're too willing to take a beating from a more experienced opponent, you risk getting used and taken advantage of, and all for nothing.

That's where guys like MMA agent Dean Albrecht come in. Not only can he hammer out a favorable deal for his fighters, he can also analyze potential match-ups and give an unbiased assessment of his client's chances.

"One of the reasons why you should have a manager is, most of these fighters will not turn down a fight," said Albrecht. "Guys who have gotten four or five fights behind them and they're still growing, they need a manager who understands the business, their skills, and their opponent's skills. Otherwise, they'll take anything, because they have to believe they can beat anyone."

But just because turning down a fight might occasionally be the better part of valor, that doesn't mean there's not a stigma attached to it in the fraternity of fighters. As former U.S. Olympic wrestling team captain and current MMA up-and-comer Daniel Cormier explained it:

"We're fighters, man. It's an ego thing. That's also why you see us all in the training room and it's like, if someone starts really going at it, everyone will pick it up and really go at it. Like tossing a bunch of meat into a pit of lions. No one wants to be seen as the guy who's shying away from anything."
Picking the right opponent is always going to be your advantage in the pay scale, because winning means everything in this sport.
-- Javier Mendez
One of Cormier's coaches, former world champion kickboxer Javier Mendez, has another way of looking at it.

"I was always looking for the winnable fight," said Mendez. "You get to a point where it's like, okay, this is a fight that has to happen. But honestly, for me, from the beginning of your career to the end, I think you should always pick the smart fights. I don't think a fight's a fight. Picking the right opponent is always going to be to your advantage in the pay scale, because winning means everything in this sport."

Then again, when dealing with the UFC, the choices aren't always so unlimited, Mendez said.

"They usually give you A or B or C and you get to choose. But sometimes they just give you A, and either you take the fight or you don't. But in general with the UFC, they tell you who they want you to fight."

Sometimes, as Swick explained, they tell you before they tell your management, and the result is a clash of differing expectations.

"The one fight I took without talking to my manager was David Louiseau. I told Joe Silva I'd take that fight and I wanted to be a number one contender so bad. Then I called Bob Cook and I remember telling him, and there was nothing but silence on the other end of the phone. That's when I remember thinking, oh sh-t."

And yet, what can you do? It's either take the fight, or risk being labeled as the kind of guy who ducks the tough competition. Eventually, you get to the point where you have to find out who you can beat and who you can't, even if you might not like the answers.