Romulo Barral Crossing Over and Back to MMA 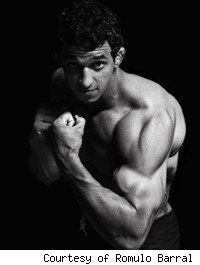 Romulo "Rominho" Barral, a five-time BJJ world champion and one of the most respected grapplers in the world, is looking to make a serious run at mixed martial arts.

But unlike other recent crossovers such as Robert Drysdale and Braulio Estima, jiu-jitsu wasn't always Barral's dream.

"I came from a small town in Brazil and my friend showed me this MMA fight on tape and then I said, 'Man, this is nice. I want to do this,'" Barral recently told MMAFighting.com. "And he told me if you want to do this, you need to learn the ground game.'

"I was supposed to be a striker," Barral continued, with a laugh. "And then I turned until a jiu-jitsu guy."

After getting hooked on MMA as a teenager from watching the infamous Gracie Challenge tapes, Barral, who trained in Tae Kwon Do as a child, began his journey into MMA by implementing jiu-jitsu under the tutelage of Vinicius "Draculino" Magalhaes of the Carlson Gracie lineage. Barral picked up the ground game right away and became, perhaps, too good for his own good, considering his original intention of MMA.

"A lot of people were telling me, 'You're really good. You should fight in jiu-jitsu, build a career and then after that fight MMA,'" Barral said. "And then that's what I did. And now I think this is the time to focus and try another career."

Two years ago, Barral moved to Los Angeles from Belo Horizonte in Brazil and as he watched more and more of his students and training partners compete in the thriving California MMA scene and on television, Barral became compelled to revisit his initial goal.

"I was watching fights and I said, 'Man, I want to do this so bad,'" Barral said. "It was inside me [telling me] you need to do that and if you don't do it you're not going to be happy. You're always going to be like, 'I should have done that.' I got to do what I'm supposed to do, which is to fight because that was my dream."

Unfortunately in June, his goals in both BJJ and MMA hit a roadblock during the BJJ world championships when he suffered a knee injury while attempting to defend a leglock from Tarsis Humphreys in the medium heavyweight finals. Barral underwent surgery the following month and is currently in the process of recovering through physical therapy and conditioning drills. He expects to resume MMA training in the next couple of months.

"I'm going to take my time to heal 100% because I don't want to reinjure my knee," Barral said. " But I want to, beginning next year, I'll be ready to fight again."

Barral isn't completely new to the MMA game; he'll technically be making his return to MMA. He's fought twice before in 2004 and 2009, but neither of the two fights were serious attempts with true MMA camps.

"These two fights in MMA I did was more to feel how I was going to be inside the cage or ring because [MMA] wasn't my main focus," Barral said. "My first fight I was in Brazil, they had MMA fights, and they say, 'Wanna take?' and I say, 'Yeah.' I take because I want to feel how it is in MMA."

For his second fight, Barral said he wasn't even preparing for a MMA fight and stuck to his usual jiu-jitsu training routine.

"I said, 'Why not?' Let's see how I'm going to feel inside the cage," Barral recalled. "My adrenaline and all this kind of stuff."

When Barral does step in the ring next year, he will no longer be fighting directionless.

"As I start to train MMA next time I will try to focus 100% to building a career and climbing to the top," he said. "You have to be focused on what you want. I did this in jiu-jitsu and I have been successful. Right now I want to do this with MMA and have the same success I had in jiu-jitsu. My main focus is for next year is to come back 100% from my injury and as soon as I can I will start to building my career."

And you can't say Barral doesn't have a goal this time around. He's already reached out to UFC president Dana White.

"I'm here. I have this connection [on Twitter]. I said, 'Why not?" Barral said with a chuckle. "So I tweeted Dana White, at least he's going to know who I am. Maybe he's just, 'Who is this guy?' but then maybe he can have a look at my name and see my jiu-jitsu [accomplishments]."

Barral, who walks around at 195 pounds, competes in jiu-jitsu at 185 pounds and plans on competing in MMA at 170 pounds. Barral hasn't settled down with a single MMA camp, but one option available is with a list of top Strikeforce players.

Barral believes he can succeed in MMA with the same dedication he invested towards jiu-jitsu. He bases that belief off one of the first lessons learned from his master Magalhaes.