Matt Mitrione's Voices in His Head Came From Boredom 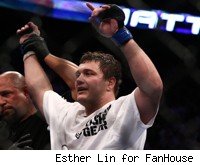 On The Ultimate Fighter 10, heavyweight Matt Mitrione tells the audience that the reason he fights MMA is to silence the voices in his head.

For his own well-being and others, it's nice to know Mitrione wasn't serious.

During an appearance on this past Monday's The MMA Hour (full video below), host Ariel Helwani asked the former NFL player if his villainy was all an act.

For that confessional on the show, Mitrione was asked why he fights and Mitrione delivered a generic (read: boring) answer. After being asked by producers to "give me something," Mitrione came up with the voices in the head story as a joke only to find out it was edited to appear as a serious response.

"I smiled thinking they would realize it was a joke and I didn't realize they would use that," Mitrione said. "So when it came on, I was like, 'Sweet Jesus, my family is going to be so embarrassed for that.'"

Mitrione, who was give the nickname "Meathead" on the show by coach Rashad Evans, claims much of his negative portrayal came from selective editing and since he was hated on the show anyway, he himself decided to play up his own character out of boredom. It's both benefited his career and hurt his public persona.

"I'm really not the douchebag, dumb jock that was kind of portrayed on the show, at least that's how I feel I was portrayed on the show, and if they saw that there was a method behind my madness - and I was doing it to manipulate certain variables and also I was bored, then cool," Mitrione said. "But if they didn't and they actually think that's my personality, then hey, let them hate me, let them boo me, as long as they care one way or another about me then I'm rather indifferent about it."

Mitrione does admit though, it's not always pleasant.

"If they see me and say mean things then it kind of sucks sometimes, but I got a four-year-old son that will tell someone off in a heartbeat," said the father of two.

Mitrione will face Joey Beltran next at UFC 119 on Sept. 25 in Indianapolis.