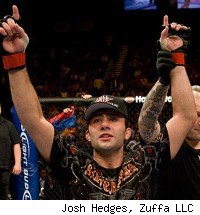 Less than a year after Dana White tweeted that Karo Parisyan would never fight again in the UFC, "The Heat" has been welcomed back to the organization and offered a fight against Dennis Hallman at UFC 123 in Auburn Hills, Mich.

MMA Fighting confirmed the news with two sources close to the situation, as well as Parisyan himself Thursday afternoon.

Both Parisyan and Hallman have yet to sign the bout agreements, which have been issued to both fighters, but both fighters have verbally agreed to the welterweight bout.

Parisyan (19-5-0, 1 NC) only competed once outside the organization since he was unceremoniously fired two days before UFC 106 last November when he pulled out of a fight against Dustin Hazelett. He submitted Ben Mortimer at Impact FC 1 in July.

Parisyan told MMA Fighting he "worked hard" over the past few months to get back in the good graces of White and the UFC, until he was finally offered another shot. He said he agreed to a new three-fight deal with the organization.

The 28-year-old has experienced a rough two-year stretch. He first pulled out of a UFC 88 bout against Yoshiyuki Yoshida due to what he described then as a "last-minute back injury."

Shortly thereafter, he publicly discussed dealing with frequent panic attacks, which he said were affecting his training and also affected his performance in a loss to Thiago Alves at UFN 13.

The Armenian fighter briefly enjoyed a successful return to the Octagon when defeated Dong Hyun Kim at UFC 94, but that result was overturned by the Nevada State Athletic Commission when he was suspended for nine months due to testing positive for the painkillers oxymorphone and hydromorphone. As a result, his win was then changed to a no-contest.

UFC 123, headlined by Quinton "Rampage" Jackson vs. Lyoto Machida, takes place Nov. 20, and will mark the UFC's first event in Michigan since 1996.