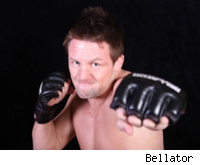 Joe Warren has certainly made an impact in his 17-month pro MMA career.

He defeated veterans Chase Beebe and Norifumi "Kid" Yamamoto in his first two fights, which just so happened to be in the DREAM featherweight tournament in 2009. Those wins landed him in the finals of the tournament before losing to eventual champion Bibiano Fernandes.

Obviously, Warren expects to win both those fights. He also expects to be the DREAM featherweight champion by Jan. 1, 2011.

Warren told host Mauro Ranallo on Sirius' The Fight Show earlier this week, that he plans to leave MMA this time next year to make a run at the 2012 Summer Olympics in London.

It's a curious move for a guy who just began his MMA career and has experienced great results since. But don't worry, after what he expects to be a golden Olympic run, he says he will finish his business in MMA.

"I'll win the Olympics in 2012," Warren told Ranallo. "We'll win this fight here this coming Thursday, then the 25th [DREAM.16], and then hopefully we get the DREAM belt on New Year's. I'll defend my titles the first few months of next year, and then retire from fighting, go into the Olympics and then come back after it."

When Ranallo pressed Warren on his sudden retirement, the 33-year-old backed off a bit.

"I don't know about retire, but I'm going to just focus on wrestling. It's a whole different ballgame out there on the Olympic-level than competing in Bellator or DREAM. I think I can do it, and I think that my kids will be old enough to be there and see it. I say it's the only thing I didn't win in wrestling, and it's something I can do, so I just don't want it to pass me by. I don't know if four years from now I will be able to make a push for it, so I know I'm young now and in shape, so I thought, Why not go out and win an Olympic gold medal for personal gratification."

A former Greco-Roman NCAA All-American at the University of Michigan, Warren has won gold medals at the Pan-Am and World Championships, but failed to make the 2008 Olympic team after testing positive for THC, a chemical produced by Marijuana, following the 2007 US World Team Trials.

If he accomplishes everything he has set out to do, this two-year stretch for Joe Warren could be one of the finest in combat sports history.

And that journey begins Thursday night in San Antonio, TX.