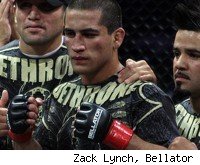 The surge in popularity of mixed martial arts in the last five years brought with it plenty of upstart promotions looking for their piece of the pie.

A few major promotions have come along, and a few have gone away, including EliteXC and Affliction, both rather infamously.

When Bellator Fighting Championships arrived in spring 2009, it launched with a format unique enough to give it a better shot at longevity than some of its predecessors.

Using season-long tournaments, Bellator crowned champions in four weight classes in its first season. The Season 2 tournaments in those classes created opponents for the Season 1 champs to defend their belts against.

Thursday, in Season 3, in its 27th event, Bellator gets to see some of the fruits of its labor when Season 1 featherweight title winner Joe Soto meets Season 2 tournament champ Joe Warren in San Antonio. It will be Bellator's first true title fight.

And while Bellator's history thus far has been devoid of major trash talk between opponents, it might have its first rivalry on its hands. Though both have decorated wrestling backgrounds – Soto at Iowa Central Community College, where he was teammates with Jon Jones, and Warren at Michigan – their personalities seem to go together like oil and water.

Soto (9-0, 4-0 Bellator), a devout Christian, seems to take issue with Warren's pre-fight talk. After Warren's Season 2 win over Patricio Freire to earn a shot at Soto, he made no secret that he believes Soto's belt belongs to him. But it seems to be Soto

Warren (5-1, 3-0 Bellator), whose spot on the 2008 Olympic Greco-Roman wrestling team was revoked after he tested positive for marijuana in 2007, started his MMA career with a heralded win over former WEC bantamweight champion Chase Beebe at Dream 7. In the second round of the promotion's featherweight grand prix, at Dream 9, he upset Norifumi "Kid" Yamamoto. Though he was quickly submitted by Bibiano Fernandes in the tourney championship, he had made a name for himself straight away.

Warren, who will turn 34 next month, said 18 months into his MMA career, he's got much to learn.

"As far as my potential, I'm about 20 percent of where I can be," Warren said. "I've got 80 more percent coming. Any competitor should be scared as hell. Just because I'm older doesn't mean I'm not nasty."

Warren believes his wrestling is superior to Soto's.

"If the fight turns into a straight wrestling match, it's going to get really interesting because, flat out, I'm the better wrestler," Warren said.

But Soto said it's his overall game and experience that gives him the edge.

"Warren's going to get into a lot of unfamiliar places that he's not going to be comfortable with," Soto said. "I think I'm a lot better rounded than he is. This isn't wrestling, this is MMA. We don't know whose wrestling is going to be better until we get in there. I'm more well rounded – I'm going to kick his (butt)."