Inside the Mind of Mayhem 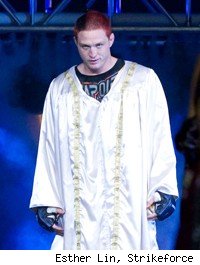 It's just after 6 p.m. in an upscale steakhouse in Houston and already Jason "Mayhem" Miller is yelling at me. Maybe it's not so much at me. More like near me. More like near everyone in the room, and people are starting to notice.

"It's stupid, all these people who are so worried about communism if we get free health care," Miller says, his voice rising far past what most people would consider an indoor volume. "What if the fire department made you go through the same steps as the non-socialist health care system?"

Businessmen in ties glance up from their prime rib dinners at the next table. Any thought they may have had of asking Miller to keep it down vanish when they see the source of the commotion – a rangy, cauliflower-eared 29-year-old with a nose that looks as if it's been broken just for fun on more than one occasion, gesturing spastically as he becomes more agitated.

He erupts into his trademark laugh, an almost cartoonishly maniacal cackle that suggests he might be on the verge of either torturing James Bond or simply flipping the table over on a whim. It's the kind of laugh that makes me briefly wonder whether this whole dinner idea, where I would sit down with Miller to learn a little about what makes this enigmatic fighter tick, was really such a brilliant notion.

This whole scene was predictable, really. When we came in Miller asked the hostess to seat us somewhere in the back of the restaurant because, as he put it, "we're going to be yelling a lot."

By we, he meant him. What the hostess didn't realize is, he wasn't kidding.

Over the course of our nearly two-hour dinner, Miller will hold court on a number of topics, from gay marriage ("I think any two people dumb enough to get married should be able to get married") to illegal immigration ("It's so funny to me how rednecks hate Mexicans who are trying to find a better life. Trust me, if America turns south, goes bad, I'm running to Canada.") and even the lessons he's learned about drug addiction from watching A&E's "Intervention."
Even though I took the brunt of the blame, and I was the guy who set the whole thing off, I kind of felt, dude, I got jumped.
-- Mayhem Miller
This last one, it turns out, is something he's spent a good chunk of time thinking about.

"There's three main stories for 'Intervention,'" he says. "Either the kid gets raped and turns into a drug addict, the kid gets molested and turns to drugs, or the kid has a religious parent who hates the fact that they're gay, and every day it's, 'Stop sewing and play football, you homo,' and the kid eventually can't take it anymore. It used to be you'd see a guy on the street corner and you'd think, that's sad, I wonder how he got there. But you didn't know. Guess what, thanks to reality TV, we know now. We watch the show!"

By this point, the men in ties have either learned to ignore our table altogether, or are at least doing a very good job of pretending. When Miller starts talking about the disgusting staph infection he got on his neck after fighting Jake Shields for the Strikeforce middleweight title, I begin to hope for their sake that it's the former and not the latter.

Then again, maybe those guys should be listening. From a distance Miller might seem like a minor disaster waiting to happen, but the truth is you'd be hard-pressed to find another pro fighter who's as passionate or as intellectually curious.

For instance, few MTV viewers realize that the oversized personality they recognize only as the "Bully Beatdown" guy just enrolled at Saddleback Community College in Mission Viejo, Calif. for the fall semester.

And why would a man with a thriving career as a pro athlete, TV host, and color commentator want to spend his days in community college classrooms with mopey 18-year-olds in board shots and flip-flops? Because if he's going to write his memoirs some day, he feels he needs to become a better writer. Otherwise, how will he ever explain the bizarre complexity of what he does?

"I think about how strange my life is all the time before a fight," he says. "It's like, here I am, standing in a cage across from another dude. Now we're going to fight each other, and you guys are going to watch. It dawns on me all the time how odd my life is, and not just because I've been jumped on national television. Network television, even. It goes to everyone's house. My grandfather saw that."

So did Strikeforce CEO Scott Coker, who was not pleased. And so did CBS executives, who have yet to give Strikeforce another shot at network TV. And the Tennessee State Athletic Commission, which fined and suspended Miller, along with his newest arch nemesis, Nick Diaz, who Miller says was the overreacting catalyst that turned a normal post-fight stunt into a full-scale brawl.

"Even though I took the brunt of the blame, and I was the guy who set the whole thing off, I kind of felt like, dude, I got jumped. I never went into the cage with that intention. I felt like I was just watching it all go down. It was totally surreal. I'm in this dog pile, bunch of dudes on top of me, and I'm like, wow, I'm getting jumped on national television. And right as I was thinking about it I heard Gus Johnson go, 'Gentlemen, we're on national television.' I'm like, I know, right?"

With Shields now gone from Strikeforce and Diaz as unrepentant as ever, Miller has turned his focus on the welterweight champ, though he isn't hopeful he'll get the chance to face him. Diaz has gone up in weight for bouts with Scott Smith and Frank Shamrock recently, but Miller believes there's "no chance" Diaz will agree to fight him. 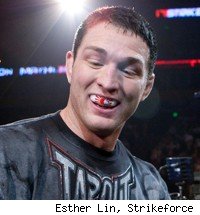 "I know he's scared, and in his culture you can't admit that you're scared. You have to act like a gangster and jump somebody," he says.

There's a reason Miller took what happened in Nashville a little harder than many fighters might have, and it had a lot to do with his experiences growing up in government housing in Fort Bragg, N.C., where his father made a career for himself in the Army.

"I get a little fired up about the whole deal, because I grew up with kids like that, where the only time they got me was when they jumped me," he says.

Not that his dad was the easiest figure to come home to either. Growing up, Miller heard all the time that he wouldn't be a man until he could beat up his dad. Then one day he did just that, and his father kicked him out of the house. Only not right away, and not in the usual manner.

"One day, my dad was like, 'Hey, I'm going to Tennessee. You want me to drop you off in South Carolina at that girl's house?' I had fallen in love with this girl who lived in South Carolina, and I mean in love. Not the kind of love you can fall in now. I mean that 17-year-old love, where you're like, I will die for this girl. It never even occurred to me that South Carolina wasn't on the way to Tennessee. Not at all. All I heard was, 'Do you want to go to this girl's house?' I was like, hell yeah. So he dropped me off there and never came back for me."

It would be five years before Miller would speak to his father again. While moving from Atlanta to L.A. to pursue his goals of fighting for a living, Miller's van broke down. He called his father for the first time since getting unceremoniously dumped in South Carolina, and he asked for $300 to fix his van. His father gave it to him.

But what a difference ten years makes. Now Miller's biggest problems are trying to figure out how to keep his wiener dog from escaping from the house he just bought in Mission Viejo, or preparing to face MMA legend and personal hero Kazushi Sakuraba in Japan later this month, or what to say to one of the models he's casually dating who texts him during dinner.

And don't worry, he's fully aware how annoying it is to hear a man complain about these things.

"The other night I was dealing with a lot of different problems, but they were all good problems like this, and I remember for a second thinking, dammit, I wish I was still living in my van right now. I wish I had no responsibilities. I wish I was still living in the parking lot of the Huntington Beach Ultimate Training Center, and just waking up in the morning to go to a jiu-jitsu class. But then I snapped back to reality and said, 'Hey idiot, this is awesome.'"

As self-motivating mantras go, 'Hey idiot, this is awesome,' might be lacking in poetry, but at least it's honest. At least it fits, in its own weird way.

And when we're talking about a kid who couldn't sit still in school, who wandered back and forth across the country with nothing more than the vague goal of being a fighter, and who somehow turned it all into a several different lucrative careers at once, is there any other way for it to fit?

Maybe the better question is, considering the man he's become – the traveling, one-man violent comedy act – if the path he took to get here was anything other than completely strange and hilariously bizarre, would you even believe it?