Palace of Auburn Hills to Host UFC 123; Rampage vs. Machida to Headline 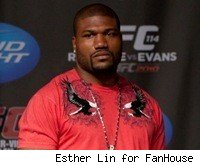 That's the word from UFC president Dana White, who told MMA Fighting that the finalization of a deal to bring the Nov. 20 event to The Palace of Auburn Hills in the Detroit suburb closed on Wednesday morning.

Jackson (30-8) is fresh off his UFC 114 decision loss at the hands of Rashad Evans, while Machida (16-1) hopes to rebound from his first career defeat, which took place in May when Mauricio "Shogun" Rua knocked him out to capture the 205-pound title.

The event will mark the first UFC show held in Michigan since UFC 9 in May 1996. That show is historically notable for being the first UFC event that didn't take place using a tournament format.

With the arena and main event in place, the UFC will quickly move to build the rest of the card.

The Nov. 20 event is just one during an ambitious 31-day stretch for UFC and WEC parent company Zuffa, which will be holding five events in three different countries during that time.