Mike Swick Looks Back at Recent Struggles, Forward to a Healthy Future 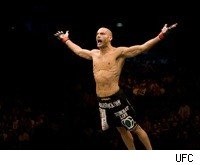 As anyone who's ever gone out to dinner with Mike Swick can tell you, watching the UFC welterweight order is an ordeal unto itself. He can't have garlic, or any of the great stuff that makes spicy food spicy. He can't have many of the staples of the American restaurant industry, in fact, and it's not just when he's cutting weight.

Because of an esophageal issue that he's struggled with for the past four years, even minor interactions like ordering at a restaurant have become exhausting.

"I know every time I have to order food somewhere, it's going to be a problem," Swick told MMA Fighting this week. "When the waitress comes up to ask for my order, I know ahead of time it's going to be an issue. I have to explain that I can't have garlic, can't have spice, go through this whole spiel every time, and then there's about a 50% chance that I'll just be ignored and it will be in there anyway. Then I'll be up for four hours feeling like I'm having a heart attack."

It's a problem that's affected his social life and his fighting career, but now he's hoping that he may be on the verge of a solution.

As Swick explained in a video blog, he recently learned that he'd been misdiagnosed with the stomach condition dyspepsia. He was told there was no cure, and the only effective management was adhering to certain dietary restrictions. Those restrictions included eating much smaller meals and not eating within hours before laying down.

For a pro athlete burning through several thousand calories a day in intense workouts, it was next to impossible. The breaking point came the week he flew to England to face Dan Hardy at UFC 105.

"That was a fight where I really wanted more than anything to back out of that fight the week of the fight. I would never do that, but it was just the worst week of my whole career," Swick said. "Every aspect of it was terrible. I got almost no sleep. My stomach was at its worst because of my esophagus issue. I was cramping pretty much non-stop and I wasn't able to eat anything. I was just really malnourished."

Just the fact that he made it through all three rounds of the fight felt like a feat, Swick said, even though it hurt to watch Hardy celebrate as if he were on top of the world.

"I had to just suck it up, and [Hardy] went on to act like he climbed Mount Everest. He got a title shot, was on the cover of all the magazines, and he beat the weakest version of me that has ever fought. The world had no idea, and I just had to swallow that. I went ahead and fought him in his backyard. I had no support. Even my hat was stolen when I walked out to the cage. Not a single good thing happened to me that week."

After that fight, Swick went to his doctor in a desperate state. Maybe there was no cure for dyspepsia, but there had to be something they could do. Even if it was some experimental surgery, Swick was up for it. He'd done it before when he was 19 and had a risky surgery to repair a congenital heart defect that would have kept him from ever pursuing his dream of becoming a pro fighter. Now he faced a different, but similarly troubling issue. If he couldn't do something about it he felt the career he'd sacrificed so much for would soon be over.

But when he was referred to a specialist, Swick found out he'd never had dyspepsia. Instead he had a combination of esophageal spasms and acid reflux, which produce similar symptoms.

"[The specialist] said, the good news is it's treatable. The bad news is, for years you've been living with this problem that you could have gotten help for. So it was kind of bittersweet news."

Now Swick is in the final stages of getting approval for a treatment that would use a neurotoxin to paralyze his esophageal muscles in order to stop the spasms. The success rate for the treatment is around 60%, Swick said. If he's among the 40% for whom it doesn't work, a potentially dangerous surgery might be his only option.

"We're hoping it works, because that would get me back to training and fighting really fast," Swick said. "It's put a damper on my life outside of fighting. My personal life, my social life, this just stops you from enjoying life so much. ... It basically feels like you're having a heart attack. It's these spasms inside your chest, and if you eat the wrong food it triggers it for hours."

Finally Swick may be close to ending to this personal nightmare. At least he's got a better than even shot. After all the pain it's caused him over the years, the part-time poker pro will take those odds.