Kimbo Slice Open to Fighting Toney, Not Impressed With His MMA Debut 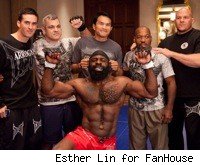 Leading up to UFC 118, James Toney told anyone who wanted to listen that he asked to fight Kimbo Slice (after his first request of facing Brock Lesnar was turned down) in his Octagon debut. Unfortunately for him, the organization had different plans and matched the boxing champion against Randy Couture.

You all know how that turned out for "Lights Out."

But when Slice stopped by Monday's edition of The MMA Hour, he said he had never been offered a fight against Toney, but was certainly open to the idea.

Slice has teamed up with his old MMA promoters, Gary and Jared Shaw, to try his hand at boxing. Jared Shaw recently told MMA Fighting that he hopes to see Slice make his "Sweet Science" debut later this year.

As for Toney's MMA debut, Slice said he was surprised at how poorly Toney performed against Couture.

"Yeah, kinda. I was [surprised]. I would have sprawled out," Slice said while chuckling.

Despite his lackluster MMA debut, Toney still believes he can be a force in the UFC, and there's no question that he would take an opportunity to fight the man he calls "Simba" Slice.

Oh, and if you are wondering if that nickname bothers Slice, it doesn't.

"That's how they do it. That's part of the game. They can talk sh-- all they want to, but when we face-to-face, they ain't going to do that. I'm not a sh---talker. Never have been, never will be."

(Ed. note: Watch this week's episode of The MMA Hour below.)