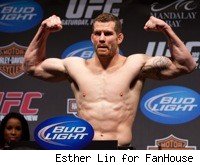 On this week's live edition of The MMA Hour, we will first be joined in studio by Daniel Gracie. The former PRIDE FC and IFL fighter will talk about his MMA comeback and what he has been up to since he last competed in 2006.

We will then be joined by Nate Marquardt, who faces Rousimar Palhares at UFN 22 on Sept. 15.

Matt Mitrione, who is scheduled to face Joey Beltran, will also stop by to talk about that fight and his progression as an MMA fighter.

Kimbo Slice will also stop by to talk about his decision to enter the world of boxing and his MMA future.

Frankie Edgar, who defeated BJ Penn for the second time last Saturday, is also on tap as a late addition to the show.

Finally, we will recap UFC 118 with our own Mike Chiappetta and, of course, take your calls.

Download this show and previous episodes of The MMA Hour on iTunes here.

(Editor's Note: The archive of the show is now available.)