Kimbo Slice: UFC Ain't Done Nothing to Me Except Put More Money in My Pockets 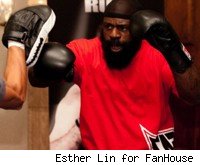 Kimbo Slice is the same person he's always been, the former street brawler-turned-MMA fighter and now professional boxer said Monday, reflecting on his stint with the UFC.

"I've always been the same person, UFC ain't done [expletive] to me except put more money in my pocket," Slice said. "Bring me down or tear me up, the UFC was what it was; the opportunity to make some money and feed my family. That's what it was. I've always been humble and I'll still be that way. They [didn't] make or break me."

Slice made the comments to Ariel Helwani during an appearance on The MMA Hour Monday to talk about his recent decision to enter boxing.

"Fighting is just something I love to do whether it's MMA or boxing," Slice said. "I tried MMA, but now I'm back to what my first love was."


Slice's life has revolved mostly around MMA the past several years and his last fight was at UFC 113 this past May where he lost to fellow The Ultimate FIghter 10 cast member Matt Mitrione. Despite helping the UFC and Spike TV earn record ratings on the reality television show, Slice was cut from the UFC after the Mitrone loss. Slice weighed offers from other promotions, but ultimately decided to reunite with EliteXC cohort Gary Shaw Productions for a run at boxing.

Slice has been built up twice by two major MMA promotions only to be brought down twice. EliteXC gambled on Slice to be a star and Slice's 14-second loss on network television became partially responsible for the collapse of the company. Slice's UFC stint also ended on a sour note when he was on the receiving end of a one-sided beatdown from Mitrione. With that said, Slice was also nicely compensated and given a ton of media exposure. So looking back on the ups and downs, Slice says he's satisfied with the way his fight career has progressed.

"I thank god for the way everything went. It was a learning experience," Slice said. "I've been a street fighter, I've been cage-tested and then hopefully I'll be ready for the ring."

Slice will be flying back and forth between his home and family in Florida to training under the watchful eye of Clemente Medina in California. The 34-year-old Slice began his first day of boxing camp Monday.

Slice's manager told ESPN last week that Slice could be boxing later this year, but Slice told The MMA Hour he'll leave it up to his progression as a boxer under Medina to determine when the right time for him is to make his in-ring debut.

"This training is different. I'm being broken down to be rebuilt again," Slice said. "I'm taking everything one day at a time, one step at a time, one punch at a time. "

Slice believes he already has the tools for boxing, citing his natural movements and instincts, and says he simply needs to be polished his skills.

There's no specific date for Slice's first fight and neither is there a name Slice wants first. But as Slice has shown in his MMA career that he hasn't allowed inexperience come in the way of signing fights (with careful matchmaking), it appears he'll carry the same approach to boxing.