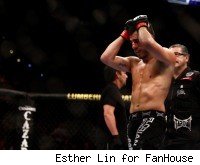 UFC president Dana White saw Kenny Florian's loss to Gray Maynard at UFC 118 on Saturday night as yet another sign that Florian cracks under the pressure of the big fights, falling short just as he's about to reach the top.

But to hear Florian tell it, the defeat was far more physical than mental.

"I take what Dana said as a compliment because I think he really believes in my skills as a fighter," Florian told MMA Fighting via email Monday morning. "I was capable of winning the fight but I would have to have fought a very boring fight. I felt great mentally & physically. I have more work to do on my wrestling & have already made the arrangements to become much better in that area of my game."

It's not the first time White has taken aim at Florian's mental game. After his loss to B.J. Penn at UFC 101, White accussed Florian of being less aggressive in title fights, suggesting he had some sort of "mental block" when a belt was on the line.

Now, after Florian dropped the decision to Maynard, White suggested that Florian is "just one of those guys who chokes in big fights."

"Gray out wrestled me. I didn't crumble. I have won many main events & important fights. I blame my weakness in wrestling on the loss, not my mental game."

Florian added that he knew going into the fight that Maynard's plan would be to grind out a win with his wrestling ability, adding, "but fighting a boring style has never been what I do."

The way Florian sees it, the loss may have highlighted the need for improvements to his wrestling ability, but not his psychological approach. Fortunately, he already has a plan in place to fix those problems.

"I thought my defensive wrestling would have been enough but it wasn't. I will be working with high level wrestlers on a ridiculously consistent basis to improve this. I need to 10X more than I was to ensure that it is not only muscle memory but so I can prevent losing in this manner in the future."