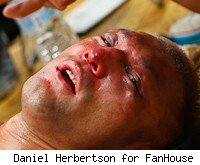 The words "war of attrition" should never be used again. They should be retired in honor of Riki Fukuda vs. Ryuta Sakurai 3.

After five minutes and thirty-two seconds of MMA, the challenger Ryuta Sakurai was laid out unconscious on the floor by the side of the ring and the champion Riki Fukuda was left an eye that was cut, bleeding and swollen completely closed.


Defending Middleweight Champion Riki Fukuda was two-for-two against Ryuta Sakurai with his most recent encounter with the R-Blood product only taking a mere 0:45 seconds. The third time around though, Sakurai gave Fukuda the fight of a lifetime.

The bout got off to a horrible start as Fukuda quickly scored a double leg takedown that sent Sakurai through the ropes where he landed face first onto the time-keepers bell.

Laying on the laps of Deep officials, Sakurai was dazed and lay motionless for a moment before rolling off the table and stumbling into the audience. Sakurai slowly made his way back through the ropes while holding his head and he sat and recovered for a number of minutes until finally signalling to referee Yoshinori "Chiba" Umeki that he was able to continue.

Sakurai looked a stiff when the action resumed as he just managed to avoid a takedown but found himself starting to bleed from the bridge of the nose after getting caught up in Fukuda's dirty boxing. Eventually, Sakurai managed to clear the cobwebs and he broke free of the Fukuda clinch and started with his own assault of punches and knees which opened a large cut over the champions eye.

Fukuda was bleeding heavily from his left eye and now needing to change the direction of the fight, got the takedown into half-guard. Sakurai quickly gave up his back after getting pounded on in half-guard but he found no relief with Fukuda behind him either as he continued with strikes while ignoring submission opportunities.

Sakurai made his way to his feet and a doctor stop was called. Fukuda's cut was checked, cleaned and the champion was cleared to continue.

The action resumed and "arts" component of mixed martial arts was long forgotten. It was a distinctly primitive moment as Fukuda and Sakurai both locked in single collar ties while smashing their free hand into their opponents face as many times as possible. The champion and challenger leaned into each either in the "Takayama/Frye" position and continued the onslaught of punches until after both taking a huge amount of damage, finally someone started show signs of cracking.

The bell which had almost ended Sakurai's night earlier managed to save him as he started to fade at the end of round one, Fukuda starting to land more with heavy punches and knees to Sakurai's unprotected nose.

Round two began but Sakurai was just a shell that seemed to be running only on heart.

Fukuda now had the clinch figured out and he quickly engaged it to continue his attack from the previous round. Again both fighters were taking heavy damage but only thirty-two seconds in a knee came that landed cleanly to Sakurai's face, knocking him out cold and sending him falling through the ropes and then four feet down, head first on to the wooden floor of Korakuen Hall.

Doctors attempted to revive Sakurai who lay unconscious on the floor at the feet of Deep's VIP spectators and stop Fukuda's bleeding while Deep officials discussed whether it was the knee or the headbutt to the hardwood floor caused the damage.

After a short moment Fukuda's victory was made official and as he thanked his opponent for a tough fight, Sakurai regained consciousness and was carried back stage.

While Fukuda impressed with his his dominating will and brute force, Deep 137-lb Champion Masakazu Imanari was thankfully more technically impressive. Although he wasn't able to secure the tap, Imanari threw every submission in the book against the out-classed challenger Tomoya Miyashita.

Imanari's opening high kick prompted Miyashita to look for takedowns early but on the mat he wasn't able to mount any offense. While the "Tenth Degree Blackbelt in Leg Locks" is obviously known for his attacks on the lower appendages, Imanri's guard also proved to be extremely dangerous also as he consistently had Miyashita struggling to avoid tapping to triangles and omo-platas in round one.

Rounds two and three proved no better for the challenger as he ate high kicks and flying knees on the feet and any time he pushed back with his own strikes, Miyashita found himself tied up in Imanari's guard. Kneebar and armbar attempts and slaps to the ears from Imanari secured him the easy decision victory.