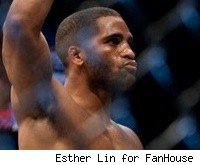 Although welterweight Brad Blackburn fell short in his Bellator debut last Thursday to Dan Hornbuckle, Blackburn will fight at least once more for the promotion, MMAFighting.com learned Thursday.

Bellator CEO Bjorn Rebney has retained Blackburn's services based on Blackburn's performance against Hornbuckle at Bellator 25 in Chicago, where Blackburn looked the best he's had in years and even dropped Hornbuckle in the first round.

"It was a very close fight. I got right hand happy and I went away from our gameplan. Rookie mistake and I won't make it next time. I stopped boxing because I wanted to get my knockout," Blackburn told MMAFighting.com after the fight. "I haven't had one [in a long time] and I got too focused on that, and I stopped fighting the fight how me and my coaches and corner had planned."

Although he was able to close the distance on the lengthier Hornbuckle, Blackburn says he should have thrown shorter punches to set up the takedowns instead of gunning for the knockout.

"I had shoulder surgery so I haven't had my power for a couple years," Blackburn said. "I had surgery and I feel like my arm has recovered. I felt like my power was back. I landed a good shot and he dropped. It's been awhile since I've had that power, so I just got really excited about it cause I used to knock most everybody out and I haven't for so long. I got my power back and I need to go out there stick to my gameplans and fight a little bit smarter next time."

The unanimous decision loss to Hornbuckle was Blackburn's third straight. Blackburn entered the UFC in July 2008 and went on a three-fight win streak with the organization, only to drop back-to-back fights this year leading to his release. Bradburn has lost four straight fights before in 2005 and he's hoping to avoid a repeat of that period.

"I wanted to get [in Bellator] and get the win," Blackburn said. "It was a good fight, but you know what? A win is a win and I didn't get one tonight ... I expect to stay busy. i want to fight within two weeks. I don't have any injuries so I got to keep training, come back here and get me a win."