The Cut List: Who Needs a Win at UFC 118 to Stay Employed? 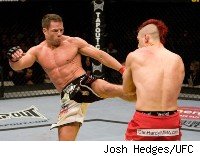 Sometimes when the UFC holds an event in a new city, it relies heavily on brand recognition alone to sell tickets. After all, if you live in Jerkwater, USA and the UFC finally shows up with a Fight Night event at your local civic center, you're probably going to go just to say you were there, even if there are no major stars in the lineup.

That couldn't be further from the truth in the case of Boston and UFC 118. Not only is a large market that only recently opened up to MMA, it's also a place near and dear to Dana White's heart. Boston doesn't get a couple of TUF contestants sandwiched between local boys. Boston gets the full UFC treatment. Boston gets a title fight, a sideshow match-up, and a number one contender bout.

But, as always, just as there are stars so too must there be drifting detritus. Half the guys on every fight card go home sad, and those who go home sad too often in the UFC don't get to come back. Let's break down Saturday night's lineup to see who desperately needs a win this time around.

Marcus Davis (17-6, 9-4)
Who he's fighting: Nate Diaz
Why he's in danger: Though "The Irish Hand Grenade" (still one of the best extremely specific nicknames in the sport) is coming off a win over Jonathan Goulet at UFC 113, it doesn't change the fact that he's a 37-year-old slugger who's 1-2 in his last three fights. Perhaps most troubling is that he got knocked out for the first time in his MMA career last November when he faced Ben Saunders. Normally you could throw up your hands and utter something about this being MMA and four-ounce gloves and anything can happen, so on and so forth, but for Davis the unprecedented TKO could be considered a sign that the years are catching up with him. If he loses to Diaz, he'll be 1-3 in his last four, with his future prospects growing dimmer.
Odds of getting cut: 3-1. Diaz shares his brother's striking style, but not his power. If this turns into a boxing match it will be to Davis' advantage. Even if Davis loses, as long as he doesn't look awful doing it he might have enough goodwill stored up with the UFC brass to get one more chance to turn it around.

Gabe Ruediger (17-5, 0-1 UFC)
Who he's fighting: Joe Lauzon
Why he's in danger: Simply put, people don't like him. In his time on season five of "The Ultimate Fighter" he managed to come off as both inept and cocky before being kicked off the show for his melodramatic (and failed) attempt at making weight for a fight. He's since racked up a six-fight win streak in the smaller shows, but hasn't beaten anyone of note in some time. Now he gets another shot in the Octagon against UFC vet Joe Lauzon, who Ruediger has already labeled "overrated." True, Lauzon isn't the UFC's best lightweight, but at least his mental toughness has never been called into question. That's more than you can say for Ruediger.
Odds of getting cut: 2-1. Ruediger is probably going to lose this fight. The question is, can he lose in such a fashion that the UFC will decide to have him back again?

Dan Miller (11-4-1, 3-3 UFC)
Who he's fighting: John Salter
Why he's in danger: After dropping a decision to Michael Bisping at UFC 114, Miller's losing streak hit the dreaded three-fight mark that usually equals automatic termination in the UFC. Whether he got to keep his job because the UFC sees something worth cultivating in him, or just because even Dana White didn't have the heart to cut a guy who's gone through what Miller has lately, we don't know. What we do know is that four straight losses would be really pushing it, especially if the last one comes against Salter, who has yet to impress in the UFC.
Odds of getting cut: 4-1. I like Miller's chances to win this fight and put an end to his losing streak. If he fights smart and brings all his weapons into the cage with him this time, he lives to fight in the Octagon another day.

Greg Soto (7-1, 0-1 UFC)
Who he's fighting: Nick Osipczak
Why he's in danger: Soto lost his UFC debut against Matt Riddle due to disqualification after an illegal upkick. That's kind of like coming in on your first day of a new job and breaking the copier. It probably won't get you fired immediately, but people are going to be watching you very closely on your second day of work.
Odds of getting cut: 3-1. This should be a close fight, and it's certainly not out of the question to think Soto can pull out a win. As long as he doesn't get absolutely destroyed by Osipczak, he stands a decent chance of coming back.