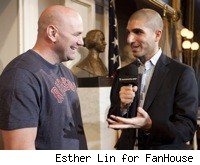 The UFC president, who spent much of his childhood in South Boston, talked about what it means to him to put on the first UFC show in Beantown, whether he feels more comfortable with his decision to sign James Toney, whether Kenny Florian will receive a title shot if he beats Gray Maynard, the UFC's debut in Toronto and Shane Carwin being named as one of 22 pro athletes who obtained steroids from an online pharmacy in Mobile, Ala.