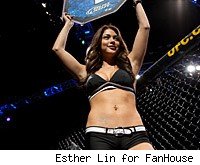 Exactly two years after Rachelle Leah appeared on the cover of Playboy, Arianny Celeste will become the second UFC Octagon girl to grace the cover of the adult magazine.

According to Celeste's official website, the 24-year-old Las Vegas native started modeling at the age of 15 and studied fitness management and nutrition at UNLV. Celeste, who joined the UFC in 2006, continues to serve as an Octagon girl to this day and remains one of the most recognizable figures during live UFC events.

"I would say Arianny is probably one of the most beloved and biggest ring card girls we've ever had so I'm sure it's going to do really well," White said.

Leah, 26, was the original Octagon girl to receive the nod for Playboy. Leah began her UFC career as an Octagon girl at UFC 48 in 2004 and gradually moved into a hosting role with the company. While she no longer works full-time for the UFC, Leah returned for two stops this year at UFC 111 and UFC 112.

(Editor's Note: Check out the full interview with Dana White below).