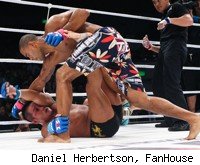 Jorge Santiago once again bested Kazuo Misaki in the fifth round at Sunday's Sengoku 14 at the Ryogoku Kokugikan in Tokyo, Japan.

Santiago battered Misaki until Misaki's corner threw in the towel to end the fight. With the win, Santiago defends his Sengoku middleweight belt successfully for the second time.

Full Sengoku 14 results are below.