In Defeat, 'King Mo' Displays Grit Worthy of a Champion 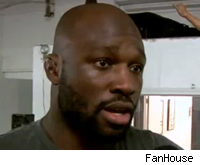 It's easy to say someone fought like a champion when they're on a winning streak, beating contenders, or wearing gold around their waist. It's not always so obvious when they walk away from a match as the loser. Yet that's just the scenario around Muhammed "King Mo" Lawal after his Strikeforce light-heavyweight championship loss on Saturday night.

Lawal may have lost the belt to Rafael "Feijao" Cavalcante at Strikeforce: Houston (does this mean Cavalcante is now the king?), but the indelible image of the champion desperately clutching at Cavalcante's legs for a takedown in the final seconds should silence any last doubts about Lawal's gameness.

We forget that Lawal's rise to the top was so fast, he was essentially learning on the job despite already holding the belt. Just two years and seven fights into his career, no one could have possibly expected Lawal to boast a fully rounded game to stop any challenge sent his way. Until Saturday night, though, all of his fights had been generally one-sided. Even his April title win over the highly regarded Gegard Mousasi progressed with little drama as he grinded out a unanimous decision. And so we've never really had the chance to find out a lot about Lawal's grit. Sure, we knew he was tough; anyone who makes it to the level of international wrestling he did is tough. But what would happen when he was hurt, when he was in real danger?

Lawal was ahead two rounds to none on the judges' scorecards when we found out. He'd been flirting with disaster for a while, trading punches and spacing out his takedown tries so that the fight had become a largely stand-up affair. That type of striking battle was always going to favor Feijao. While Lawal tends to shift stances frequently to mix up looks, Cavalcante is consistent with his love for power striking. The Brazilian bomber has quick, heavy hands and a deadly muay thai clinch, and both played roles in closing out the show.

The 60-second finishing sequence saw Lawal take an absolute drubbing. After an overhand right knocked Lawal backward, Feijao drilled him with two flush knees from the clinch. The second wobbled his backward, forcing Feijao to give chase. Cavalcante caught Lawal halfway across the cage, clipping him with a perfect right to the jaw that sent Lawal crashing backwards to the mat.

The fight certainly could have been over right there, but Lawal instinctively reached for Cavalcante's legs, an impressive reaction that should not be discounted from a fighter who's never really been in any type of trouble before, and rest assured, at that point he was in dire straits. A blink later, Cavalcante was punishing the champ with elbows to the head as referee "Big" John McCarthy warned Lawal to defend himself.

Following McCarthy's words, Lawal clasped his hands together behind Cavalcante's legs, desperate to take his opponent down and give himself precious recovery time. Lawal somehow drove Cavalcante into the cage, but the positioning actually helped Cavalcante stay upright.

With the takedown no longer a big threat, the strikes started up again. After a few Cavalcante elbows, Lawal's right leg began to give out. But he did not go down.

Feijao resumed the assault. The elbows continued, and Lawal's left hand limply dropped to the mat. But he did not go down.

After 20 elbows and punches, finally his legs collapsed, just as McCarthy stepped in to stop the action. As Feijao pulled away, ready to celebrate, Lawal's right hand was still hooked around his leg, still trying for the takedown that could have saved him. It was only 60 seconds, but it was an eternity. His body surrendered even though the rest of him refused to.

At 7-1 and with a championship already on his resume, Lawal still has his best days ahead. His wrestling will always be the strongest part of his game, but now we know his heart is right there as well.

During his brief run in the MMA world, Lawal's made a fair number of fans as well as haters. His outspoken nature is seen by the former as candid and refreshing, and the latter as self-serving and egotistical. Most likely, what people saw from him in the last 48-72 hours of this event week hasn't changed too many minds about him, but looking past the persona, his show of undying spirit in defeat makes him worthy of even the new king's respect.