B.J. Penn: 'I Really Would Like to See James Toney Do Good Out There' 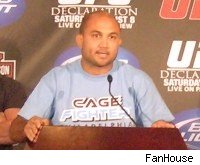 The spotlight should belong to B.J. Penn and Frankie Edgar at UFC 118, where the two will be facing off in a rematch to determine the UFC lightweight champion. But as the event moves closer, much of the intrigue has centered around boxer-turned-MMA fighter James Toney, who makes his octagon debut against five-time UFC champ Randy Couture on the same night.

Unlike some MMA purists though, Penn is unbothered by the presence of the pugilistic great. In fact, the laid-back Hawaiian is one of the few in the MMA world who's openly voiced a desire to see Toney perform well.

Using the recent case of Chael Sonnen as an example, Penn explained that fans sometimes take the fighters' pre-fight trash talk too seriously when it's simply an attempt to hype the fight.

He says Toney's comments about Couture and MMA are no different.

"I remember talking to him a while back and he said, 'BJ, I want to get involved with this stuff,'" Penn recalled. "And I never... I thought he was just running his mouth at first. I thought we were just, you know, having a conversation. And here he is, here he is. He's stepping in and fighting a five-time UFC champ on his first fight. The guy's got some b----, man. And I give it to him. And I just, I wish the best for him."

But Penn still knows Toney's got the odds stacked against him. Asked his opinion of Toney's chances, Penn gave a realist's answer.