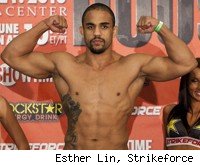 HOUSTON – You can't exactly say that Friday's Strikeforce: Houston weigh-ins from the Toyota Center went off without a hitch. Three fighters came in overweight and another didn't show at all, but at least the Showtime portion of the card remains unaffected.

The strangest part of Friday's proceedings was that Jorge "Macaco" Patino, who is scheduled to face Andre Galvao on the preliminary portion of the card, did not show up to the weigh-ins at all. A Strikeforce representative told MMA Fighting that Patino was apparently held up by "car trouble," and it's still unclear whether the fight will go on at all.

On the televised portion of the card, lightweight K.J. Noons came in at 156 ¼ pounds for the 155-pound bout, but Noons' opponent, Jorge Gurgel, immediately made it clear that he wasn't going to force Noons to cut the extra weight.

Full weigh-in results for Strikeforce: Houston are below:

*** has one hour to cut the extra pound to make the 130-pound catchweight limit. Texas does not grant a one-pound allowance for catchweight fights.

UPDATE: Patino reportedly showed up after the weigh-ins had concluded and clocked in at 170 1/2 lbs.)