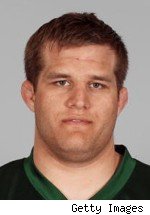 Grabowski, an undefeated Polish fighter making his U.S. debut, at times looked like he had a size and strength deficit against his big and -- let's face it -- fat opponent, Scott Barrett. But he ultimately proved to have too well-rounded a game for Barrett to handle, and he easily won a unanimous decision, 30-27 on all three judges' cards.

Konrad, a former NCAA heavyweight champion wrestler, also won 30-27 on all three judges' cards in beating Rogent Lloret. That fight consisted largely of the bigger, stronger Konrad getting on top of Lloret and staying on top of him, and the fans booed loudly at the lack of action. Both Grabowski and Konrad have a long way to go before they'll be fan favorites.

But Grabowski and Konrad were both winners Thursday night, which means they'll join Neil Grove in the heavyweight tournament semifinal. The fourth semifinal participant will be determined next week when Mike Hayes fights Alexey Oleinik. It's a wide-open tournament, but based on what we've seen so far, my money is on Grove to take it.