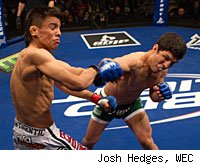 MMA Fighting has the complete weigh-in results for the 20 fighters on Wednesday's WEC 50 card.

All 20 fighters made weight for their bouts. Only one, Zach Micklewright, needed a second attempt when he came in a half-pound over at 156.5 for his lightweight bout with Bart Palaszewski. But after removing his briefs, he made the allowed 156 pounds.

WEC 50: Cruz vs. Benavidez takes place at The Pearl at the Palms Casino Resort in Las Vegas and features a main event bantamweight title fight between champion Dominick Cruz and Joseph Benavidez. The two fought at WEC 42 last August with Cruz taking the unanimous decision, handing Benavidez (13-1, 4-1 WEC) the first loss of his career.
That made Cruz (15-1, 5-1 WEC) the top contender for the title Brian Bowles took from Miguel Torres on the same card. And at WEC 47 in March, Cruz beat Bowles by TKO when the champion couldn't answer the bell with a broken hand before the third round. Cruz's only career loss came at WEC 26 to former featherweight champion Urijah Faber, Benavidez's main training partner at Team Alpha Male in Sacramento, Calif.

"It's another fight," Benavidez told the crowd at The Palms after taking the scale. "It's a huge fight – something I've waited for. I'm a different fighter since (the first time we fought). And no better way to prove than to beat the guy who beat me for the world championship. ... I'm thinking of going out there and dominating and taking that belt.

Cruz said he'll try to capitalize on things he learned about Benavidez in their first fight.

"We're not strangers to each other," Cruz said. "I saw a lot of mistakes that he made the last time and I'm go in to exploit those mistakes this time and keep the title as mine."

The main card for WEC 50 airs live on the Versus cable network at 9 p.m. Eastern on Wednesday.