Is Paul Heyman on the Verge of Entering the MMA World? 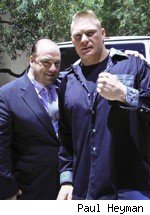 Paul Heyman has always had his finger on the pulse of the MMA world. He remembers watching UFC 1, had a good working relationship with Semaphore Entertainment Group, the original owners of the UFC, and he even created characters (see: Tazz) in his wrestling universe based on fighters.

After leaving World Wrestling Entertainment in 2006, he got together with a group of investors and former K-1/PRIDE producers in attempt to purchase Strikeforce. That deal never materialized because, as Heyman said on Monday's edition of The MMA Hour, he felt Strikeforce CEO Scott Coker wasn't getting a fair deal.

"At the end of the day, one of our financial guys, who was the key to the deal, wanted to change the deal, and I wasn't comfortable with it. One of the producers who I was very close with said, 'This deal is going to go south and Coker is going to get burned,' and I wasn't going to do it, especially coming out of the wrestling world and my first entry into MMA is going to be that I'm a rip-off artist? No thanks. I don't want to live the rest of my life with that reputation. I already have enough of that as it is. This ain't a carny play. This is a legitimate business offer and I wasn't trying to rip anyone off."

How was the deal a bad one for Coker? Heyman said it quickly became a reverse merger, "and once you get into the reverse merger business it becomes real shady real fast."

That experience, however, didn't end Heyman's flirtation with MMA. In fact, he had also been approached by the now-defunct IFL and YAMMA about working for their promotions, but the former Extreme Championship Wrestling owner passed on those opportunities because he didn't believe in their business philosophies.

So he moved on.

Heyman has devoted much of his time since then to his Web site, Heyman Hustle, and his creative agency, Looking for Larry Productions.

Believe it or not, UFC 111 was the first MMA show he ever attended, and he was very visible when his "dear friend" Brock Lesnar fought Shane Carwin last month at UFC 116.

Lesnar and Heyman first met in 2002 when the wrestling rookie was paired with the veteran in WWE. They have remained close friends ever since.

So close that Heyman and Lesnar are writing a book together, entitled "Undisputed," which is set to come out in 2011. Heyman is also writing a separate book about his own life, which will also be released next year.

The soon-to-be 45-year-old has accomplished more than most believed he could, and he could certainly keep cashing checks, if he wants to, in the wrestling business. TNA Wrestling, the closest thing WWE has to competition, has been courting Heyman for months, but as Heyman said on the 90-minute show, "They're not ready for me yet."

For one reason or another, TNA has been unable to entice Heyman to return to his wrestling roots. Does his "fascination" with MMA have anything to do with his resistance to return to wrestling? Heyman says no, but listen to the man talk about MMA for just a few minutes, and you will quickly notice how much more excited and animated he gets.

"I'm on the periphery here, and it's a fascinating movement to me. It's fascinating. Fascinating. And it hasn't even scratched the surface yet of it's potential. "

And if you're wondering whether Heyman is fascinated enough by MMA to the point where he would want to work in the industry, the answer is yes. He said so himself. He just hasn't seemed to figure out what his role would be just yet.

He does know for sure that he doesn't want to be in front of the camera anymore.

Heyman knows there is no need for him right now in the UFC. The MMA leader, in his opinion, is doing just fine without him.

But what about his old friend Coker? Heyman thinks he can help Strikeforce take the next step, but he also added that, "I just don't see the fit yet.

"They need a lot of help television-wise. Because it's the CBS/Showtime vision for MMA, and it's not really a mixed martial arts vision for MMA. And go back to the one everybody points to: they missed 'King Mo's' entrance," he said.

"You got a bunch of golfing people doing this thing. ... It's really like the golfing channel presents mixed martial arts."

Heyman admitted to meeting with Coker in New York City just last week. He wouldn't go into the specifics of the meetings, but clearly it was more than just two old friends hanging out.

He hasn't attended a Strikeforce event "yet," but when pressed, he said he would "probably" be working in MMA in some capacity this time next year.

If history is indication, Heyman could certainly be of help to any upstart promotion when it comes to promoting the organization, building stars and accentuating the brand's strengths.

How invested he will get himself into the sport seems to be the biggest issue he is, ahem, wrestling with right now. After all, Heyman has spent over 20 years of his life in the promotion business.

"I don't know. That's the thing, I don't know if the smart move in life is to devote myself to be full-time [in MMA]."

Only time will tell.

(Ed. note: Watch Heyman's appearance on The MMA Hour below.)