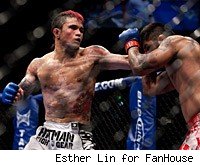 If things go to plan, Scott Jorgensen might want to think about changing his nickname Thursday morning.

They call him "Young Guns," which probably has more to do with his tendency to get in the pocket and throw hands with another willing slinger than it does any love for the Emilio Estevez movie.

But Jorgensen says his opponent on Wednesday's WEC 50 card in Las Vegas is expecting a shootout – and if that's the case, Brad Pickett might have to work to find one.

"He wants to stand and bang," Jorgensen told MMA Fighting on Sunday. "Am I going to oblige him? Why? I'm smarter than that, man. I'm definitely not one to shy away from a good gun fight, but I'm a smart fighter now."

At least he remembered the "gun" reference.

Jorgensen (10-3, 6-2 WEC) has won four straight in the WEC's loaded bantamweight division. And if not for a split decision loss to Antonio Banuelos at WEC 41 in June 2009 – a fight many thought should have gone his way – the six-shooter would be at seven, staring down the barrel of eight straight against Pickett.

It's not exactly a secret that a decisive win over Pickett (19-4, 2-0 WEC) on Wednesday could put Jorgensen front and center for a crack at the winner of the 135-pound title fight between champion Dominick Cruz and Joseph Benavidez, WEC 50's main event. And Jorgensen believes had the outcome of his first fight against Banuelos – he won the rematch at WEC 48 in April – been different, he'd have had his title shot long ago.

"I think if I would've won that fight, my path would've been shaped a little differently," Jorgensen said. "I would've got bigger fights, and winning those bigger fights would've put me in a title shot a long time ago."

But that loss gave him some perspective.

"I wouldn't be the fighter I was today if I didn't lose that fight," Jorgensen said. "It's a horrible thing for me to say that you learn the most when you lose – because you don't have to lose to learn. But I changed as a fighter that night. It's bittersweet – I hate it, but I love it."

In that fight, a hidden gem on the preliminary card of the Mike Brown-Urijah Faber rematch in Sacramento, Calif., Jorgensen was tagged early by Banuelos – right in the eye. It hurt. He knew it. He showed it. And "Young Guns," at that time, had an itchy trigger finger.

"I knew that everybody thought I got hurt from the way I reacted," said Jorgensen, adding that the punch Banuelos threw wasn't illegal, but affected his vision. "So it became a pride issue. Coming from a wrestling background, and the type of person I am, I got really upset – angry. I let that affect my game plan. I would've beat him – if I would've just kept my cool ... It would've been like the second fight. But it is what it is, and I learned from it. I learned to keep my cool and be calm and fight hard."

Four months after that loss, Jorgensen made quick work of Noah Thomas at WEC 43. Then he showed his newfound patience in a unanimous decision win over Takeya Mizugaki. He needed no patience against Chad George at WEC 47, slapping on one of the year's deadliest looking submissions and winning by guillotine 31 seconds into the first round. And he followed that up seven weeks later by exacting his revenge on Banuelos with a decision victory.

In Jorgensen's estimation, he doesn't need a big-name gym in a big-name city to become a big-name fighter – he just needs, as he says, guys that can kick his butt every day to make him better.

That mentality dates back to his days wrestling collegiately at Boise State. After college, he stuck around and started training for mixed martial arts, a sport he had been a fan of since the early days of the UFC, watching with his dad and brother – though mom wasn't a fan. And he has eschewed leaving Boise for the more prominent MMA camps to instead work with the Twisted Genetiks camp he co-founded with some college teammates once school was out.

"The one thing I know is that no matter who I fight or what camp they're from, when they step in that cage with me, they better have trained to get tired," Jorgensen said. "Because I'll push you until you're so tired that you don't know anything."

He believes Pickett, a British import who trains at ATT with former WEC featherweight champ Mike Brown, wants that gun fight. But Jorgensen just wants to win. And then he has a bigger plan.

"I don't want a title shot – I want the belt," Jorgensen said. "I don't want to be a contender. I want to be the champion. In this sport, that's the ultimate goal. That's the light at the end of the tunnel. That's what everybody's shooting for. I've never trained to be second place, and I think that's what 'top contender' is. I train to be the best."