Joseph Benavidez Not Underestimating Dominick Cruz This Time Around 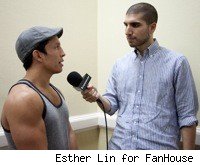 Benavidez, who lost to Cruz via unanimous decision last August, talked about why he underestimated Cruz the first time they fought, how he has improved since the loss, why the WEC made the right choice to give him the title shot and whether he would ever fight his friend Urijah Faber.