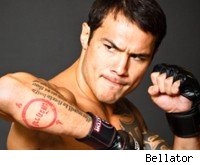 Bellator Season 2 lightweight tournament winner Pat Curran has pulled out of his Season 3 fight against champion Eddie Alvarez with an injury and will be replaced by Roger Huerta at Bellator 33.

MMA Junkie reported the news on Thursday and MMA Fighting has confirmed with Curran that he is out and with sources close to Alvarez's camp that he and Huerta have agreed to the bout, which will not be a title fight.

MMA Fighting has also learned that the fight will take place on Oct. 21 in Philadelphia, not Kansas City as previously reported. Bellator's official website does not list a city or venue for the show. [Eds. Note: Bellator confirmed the fight during its Thursday night event broadcast.]

Last month, Bellator founder and CEO Bjorn Rebney told MMA Fighting his hope was to have Alvarez, a Philadelphia native and resident, fight on the East Coast.

"I badly, badly want to do it on the East Coast," Rebney said. "I would love to do it in either New Jersey or Pennsylvania. But with Eddie's almost religious following around the Jersey-Philly area, that's obviously where we've been putting most of the effort to try to land a deal."

Additionally, MMA Fighting has learned that Bellator officials are calling this the biggest fight in the promotion's short history – and are even discussing a behind-the-scenes TV special that would apparently be in a style similar to the UFC's "Countdown" shows on Spike TV or Showtime's "Fight Camp 360" series for Strikeforce.

Curran told MMA Fighting on Thursday that the injury is a "slap tear" in his right shoulder that would not be healed in time for the planned fight with Alvarez, but said he'll still get to fight Alvarez for Bellator's lightweight title.

"I'm out for this season, but I'll still get to fight Eddie sometime in the winter," Curran said. "I'm very disappointed. I'm just glad the fight got pushed back and I still get a chance to fight Eddie."

Curran (12-3, 3-0 Bellator) was perhaps the biggest underdog in the Season 2 lightweight tournament. But he made quick work of Georges St-Pierre protege Mike Ricci in the quarterfinals with a highlight reel knockout, then beat Huerta in a close unanimous decision in the semifinals. Huerta, a former UFC star, was Bellator's big-ticket offseason signing heading into Season 2. And in a third straight upset, Curran beat Toby Imada in a split decision to win $100,000 and the Season 2 lightweight crown, as well as the right to face Alvarez.

Huerta (21-4-1, 1-1 Bellator) started his UFC career 6-0, including memorable wins over Leonard Garcia at UFC 69 (which got him on the cover of Sports Illustrated) and Clay Guida at the Season 6 finale of "The Ultimate Fighter." After losing to Kenny Florian at UFC 87, Huerta took time off to focus on his acting career. He finished out his UFC contract with a split decision loss to Gray Maynard at Fight Night 19. After toying with the notion of signing with Strikeforce, Huerta signed with Bellator specifically for the Season 2 lightweight tourney.

Huerta was also allegedly involved in an altercation outside a bar in Austin, Texas, earlier this month. The video wound up on TMZ.com and shows a man that appears to be Huerta questioning another man over striking a woman in the street. After the man, alleged to be former University of Texas and Atlanta Falcons linebacker Rashad Bobino, confronted Huerta, Huerta knocked him out.

Alvarez (20-2) has won five straight, all by choke submissions, and 10 of his last 11. His only loss in that stretch came against Shinya Aoki at the Dream/K-1 Dynamite! 2008 show in Japan. He last fought at Bellator 17 in May, submitting former UFC fighter Josh Neer in the second round.