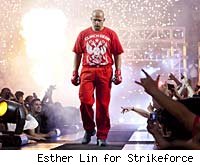 Six weeks after MMA legend Fedor Emelianenko lost his first fight in nearly a decade, his M-1 Global representatives continue progress towards an extension that would lock up the Russian great with Strikeforce in a long-term deal.

The 33-year-old Emelianenko, who has just one fight left on a three-fight contract signed one year ago, has recently voiced a preference for a four-to-six fight extension. The two sides are more than halfway to an agreement, according to M-1 Global director of operations Evgeni Kogan, who told MMA Fighting on Thursday that the sides hope to have a deal in place very soon.

"I think the talks are going well," he said. "There are always things to get sorted and ironed out but we are probably two-thirds of the way there. I think that the next fight and the deal overall will be announced at the same time within the next month. We have an [M-1 Selection] event in [Atlantic City,] New Jersey on September 18, and we may be ready to announce by then, hopefully."

After his Nov. 2009 win over Brett Rogers, Emelianenko and M-1 underwent contract talks with Strikeforce that dragged out longer than expected, causing him to miss an opportunity to fight on an April card that was broadcast on CBS.

This time, though, the two sides are progressing talks in quicker fashion, with hopes of getting Emelianenko back in the cage as quickly as possible. While Kogan could not go into the specifics of the negotiations, he noted that the remaining points to be agreed upon were "working out the details... timeframes, frequency of fights, financials of course and a few other things as well."

Asked if it is Emelianenko's preference to fight again before the end of the year, Kogan responded in the affirmative.

"Yes, it definitely is," he said. "If we can organize the path forward with our partners in time, I believe we will see Fedor fighting before the year is out."

According to Kogan, Emelianenko remains quite happy with San Jose, California-based Strikeforce, which has co-promoted each of his last two fights in conjunction with M-1, a company in which Emelianenko owns an interest.

What matters most to fans though, is when he actually returns, as well as who he's facing. Kogan said there are a number of options being discussed as possibilities for Emelianenko's return fight.

It he does indeed return before the year is out, it seems unlikely that he'll rematch Fabricio Werdum, the man who ended his 29-fight unbeaten streak via first-round triangle/arm bar submission on June 26. Strikeforce CEO Scott Coker recently said that due to an elbow injury, Werdum wouldn't be back before the start of 2011.

So who might Emelianenko face if he returned before the new year? What about the possibility of Strikeforce heavyweight champion Alistair Overeem?

"I don't want to name names of possible opponents, but this match should be one that pleases the fans," Kogan said.

MMA Fighting asked Kogan if Overeem was one of those possibilities.

"He is one of them," he replied, though reiterating that a "number of options" are being discussed.

Earlier this week on the MMA Hour, Coker told Ariel Helwani that he didn't think the Emelianenko-Overeem fight would happen this year, though he didn't rule it out completely.

If Strikeforce does decide to match the two, M-1 believes that a "champion's clause" would not be the complicated factor some consider it to be. The clause is often included in fighters' contracts and binds the champion to an organization as long as he holds the belt. Although Strikeforce has publicly voiced a preference for it, M-1 is convinced it would not be an issue.

Kogan says that because Emelianenko's next fight "will most likely be fought under the majority, if not all, of the terms of the current contract," the possibility of the champion's clause would not impede a possible fight with Overeem.

"It is something that can get brought up [in extension negotiations], I agree, but it's not in his current contract," Kogan said.

Even with a deal two-thirds of the way done, there remains plenty of work to do for both M-1 and Strikeforce, but both sides have their mandate from a fighter who is motivated to wipe away the unfamiliar site of him losing.

"He's looking forward to fighting," Kogan said. "We're trying to make it happen as quickly as possible. Hopefully he's in the cage before 2011."