Marc Ratner: No Truth to Reports of UFC 123 in Chicago 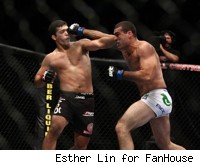 Despite published online reports saying the UFC will head to Chicago in November, that will not be the case.

MMA Fighting spoke Wednesday to UFC vice president of regulatory affairs Marc Ratner, who said those reports are not accurate and the promotion has not yet decided on a city or a venue for an expected Nov. 20 pay-per-view card.

"The circus is in town at the United Center," Ratner said. "We're looking at different venues – we had to wait for the NBA schedule to come out officially yesterday, and we'll probably make a decision for Nov. 20 in the next week."

Initial reports cited sources close to the UFC and Chicago's United Center as saying the event would take place there on Nov. 20. The United Center is home to the Chicago Bulls and Chicago Blackhawks, and though both teams are on the road Nov. 20, it is because of three performances of the Ringling Bros. and Barnum & Bailey Circus. The circus makes an annual trip to Chicago, always in late fall, and always forces the Bulls and Blackhawks into what the teams refer to as their "circus road trip."

Though the Allstate Arena, 17 miles northwest of the United Center in suburban Rosemont, is another viable candidate for the UFC, Ratner said the promotion was specifically targeting the United Center. He said the UFC hopes to return to the city in the first half of 2011.

"We're definitely looking at Chicago, the city itself, as a venue sometime next year – probably in the first or second quarter," Ratner said.

The UFC's first Chicago show was UFC 90 in October 2008, which took place at the Allstate Arena. It was headlined by a middleweight title fight between Anderson Silva and Patrick Cote, who injured his leg in the third round to give Silva a TKO victory.

Ratner also said the United Center's proximity to downtown Chicago is a factor in preferring its next Chicago event there instead of the suburbs. The UFC would also appear to favor the United Center from an arena capacity standpoint – it holds about 3,500 more people than Allstate Arena for a typical basketball game. UFC 90 at Allstate Arena drew just over 15,000 fans, putting it in the UFC's top 20 attended shows of all time.

Ratner said the promotion is looking at new markets, as well as markets it has been to in the past, but that the Nov. 20 show is the only one in 2010 that is still open.

"Milwaukee would be a great market for us, as well as Pittsburgh," Ratner said. "We're looking at Philadelphia again. So we just have a lot of things. But the rest of this year, except for Nov. 20, we are booked up."

UFC 123 is reported to be headlined by a main event of former light heavyweight champions Quinton "Rampage" Jackson and Lyoto Machida.