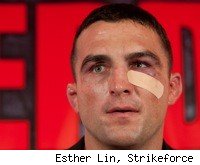 Scott Smith is one of the more popular middleweights in Strikeforce, but according to his manager Mike Roberts, "Hands of Steel's" days of fighting at 185 may be on the verge of coming to end, at least for now.

Roberts said on Monday's edition of The MMA Hour that Smith, who most recently lost to Cung Le in June via second round KO, is seriously considering dropping down to welterweight.

"The funny thing is that we were in San Diego for the Mark Munoz and James Irvin's fight, and he was walking around at at around 189 pounds right now," Roberts said. "And that's not really super working out hard or nothing. So I believe there's a pretty good chance he'll be down at 170 for his next fight."

The 31-year-old Smith has never competed as a welterweight before.

Since getting released from the UFC in 2007, he's compiled a 5-3 record with 1 no contest. His most famous win since leaving the organization was undoubtedly his come-from-behind victory over Le in December 2009, but that moment was quickly trumped after Strikeforce booked the immediate rematch, which was won by Le.

Smith would bring some much-needed star power to the Strikeforce welterweight division, which is considered by most to be the organization's weakest. Nick Diaz is currently the 170-pound champion, and with Jay Hieron's future in limbo, there doesn't appear to be many contenders right now in that particular division.

Of course, one would think Smith would have to go on a run before facing Diaz, as he lost a 180-pound catchweight fight to Diaz in June 2009.