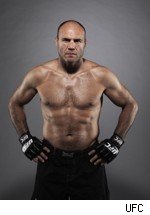 OAKLAND – On a clear Saturday afternoon in August Randy Couture slipped on an Oakland A's jersey, a UFC baseball cap, and a comfortable pair of jeans and headed out to the ballpark to partake in that most easily embarrassing of all public sports outings: the ceremonial first pitch.

Not that Couture was worried. He'd done this only a few weeks before in Chicago, and after fighting in a cage for most of his professional life, playing an abbreviated game of catch in front of a crowd that's still mostly trickling into the stadium is a relatively low-stress activity.

It was just another appearance. Another thing he had to do to satisfy the PR gods.

But with his big fight against boxing legend James Toney at UFC 118 just a few weeks away, and with the summer action movie "The Expendables" to promote along with these occasional UFC-related obligations, it begs the question: when does Couture even find time to hit the gym these days? Is it possible he's not completely convinced that Toney is a challenge worth getting too worked up over?

It's one thing to make the rounds on fight week, when you're already away from your home gym. But to hit the road in the weeks leading up to such a momentous fight with broad crossover appeal seems just a tad bit reckless. Or at least it would if this weren't Randy Couture we're talking about -- a man with the experience and the resources to make any place he happens to be into a traveling gym.

"I take my coaches with me and get training in wherever I am," Couture told MMA Fighting before throwing out the first pitch. "I went to New York for a week for a media tour and took Ray Sefo with me and got good training there. I missed half a day for the premiere [of "The Expendables"] at Grauman's Chinese Theatre, but that was such a cool experience that it was worth it. I really haven't missed much other than that. Honestly, it's actually been a nice break from the normal grind of a training camp. I think I'm right where I should be."

Couture insists that he understands the threat Toney brings into the cage, but at the same time he doesn't believe everything he hears coming out of the Toney camp. For instance, when asked if he'd heard that Toney supposedly tapped out Strikeforce light heavyweight champ "King" Mo Lawal with a choke, a sly grin spreads across the ex-champion's face.

"Nah, I don't believe that," Couture chuckled. "He's probably doing some wrestling with Mo Lawal. That wouldn't surprise me. I know he's not training with Dean Lister. Dean called me himself when that one broke and said, 'I'm not training with that guy. Don't believe that stuff.' But it doesn't matter. All the talk is just talk. No matter who he can get to say he's tapped them out in training, on the day he's still going to walk down to the cage and get in there with me and that's when all that stuff stops."

Couture hasn't seen any of Toney's YouTube masterpieces, he said, nor has he seen the interview Toney did with MMA Fighting's own Ariel Helwani, where Toney pulled out a Couture action figure clad in a dress and clutching a purse.

As for the 'MMA vs. boxing' angle that the UFC, the fans, and the media have latched on to in the run-up to this fight, Couture isn't exactly buying into the narrative or feeling the pressure of being his sport's representative in such a showdown.

"This sport is doing awesome. We'll be compared to boxing forever and that's probably not going to stop after this fight. There'll be some other boxer that's going to step up and say he's going to knock everybody out. The sport's going to continue to do what it's going to do whether I win this fight or not. Obviously, I'm preparing to win and doing everything in my power to win this fight. James is a dangerous guy. There's no doubt about that. It's still a fight when we get in there, but it's a mixed martial arts fight – not a boxing match."

If anything, all the tinkering the Toney camp has tried to do with agreed-upon weight limit for this bout seems to have made Couture question what kind of shape Toney will be in.

While he may not believe that Toney is choking out experienced grapplers, Couture said he is interested to see what Toney may have picked up in his brief MMA training. Then again, Toney's not the only one who's been studying. After working with K-1 kickboxer Sefo in preparation for Toney, Couture feels that he understands how the boxer generally sets up his punch combinations, and what angles he likes to attack from.

In the early moments of the fight, Couture admitted, when Toney "has his legs under him," he'll be a dangerous man. But when asked whether Toney can really understand or appreciate the realities of MMA after such a short introduction, Couture just shrugged.

And just in case you're wondering how that first pitch turned out? Fastball, right down the middle for a perfect strike. He is "The Natural," after all.