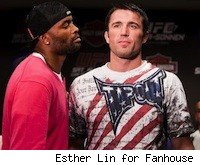 Anderson Silva's manager, Ed Soares, appeared on "The MMA Hour" with Ariel Helwani earlier today to discuss the aftermath of Silva's successful title defense at UFC 117. While he stopped short of arguing against an immediate rematch for Chael Sonnen, he didn't seem terribly enthusiastic about the idea either.

"At the end of the day, whatever the UFC wants, we'll do. No problem. There's a part of me that thinks that it would make a lot of sense to do a rematch. I don't know where [the UFC's] head's at, and what they want to do. But on the other hand I feel like, you know what? He had his opportunity."

Soares suggested that because Sonnen used his wrestling skills to dominate the vast majority of the fight and yet still lost, that could be seen as a reason not to give him another crack at the champion.

"The way I look at it is, Chael fought his fight. And Chael had Anderson on his back for twenty-two minutes of that fight. ...The way I feel is that Chael had Anderson in the position he wanted him, and if he wasn't able to finish Anderson in twenty-two minutes in the position you said you wanted him in, then, hey man, you had your shot. No offense, not saying you can't get another shot, but you know what I mean?"

Soares said he hadn't yet spoken to UFC president Dana White about who might get the next shot at Silva's title, but added that, "it doesn't matter what I want or what Anderson wants. It's what the UFC wants."

Soares also touched on the somewhat strange finish to the fight, saying he thought Silva held on to Sonnen's arm after the referee stepped in simply because he was "confused" as to whether the fight was really over. The ending also played a role in Soares minor blow-up at Sonnen's corner afterwards.

"What happened was, number one, I was upset that Chael was...trying to deny at first that he tapped. I went through that scenario once before with Chael myself, with Paulo Filho. Chael has been known to do that once in a while. I don't think Chael is a dirty fighter. I don't think any of that.

"But when I walked in the ring, I can remember looking over towards Chael's corner and I saw his boxing trainer kind of look at me and put the thumbs down towards Anderson. And you know what? I lost my cool. I can tell you that if I could take it back, I would, but my emotions got the best of me at that moment and definitely some words were said."

Soares went on to say that he didn't have any ill feeling toward Sonnen, but simply got caught up in an emotional moment after his fighter's dramatic comeback victory.

"I was pissed. But like I said many times before, these guys are not just my clients. These guys are my friends and my family. I love these guys. I love every one of my guys. When you see your guy go through what [Silva] went through, when I walked in and saw that, it just struck a nerve. If I offended anybody, I seriously apologize."