Bobby Lashley: I'd Like to Earn a Heavyweight Title Shot in Early 2011 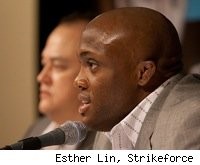 Voicing a belief that he's turned the corner in his MMA career, Bobby Lashley says he expects to be in the Strikeforce heavyweight title picture by early 2011.

The 5-0 fighter, who is scheduled to face Chad Griggs at Aug. 21's Strikeforce: Houston show, has spent time in recent months training at the San Jose, Calif., American Kickboxing Academy, and said he's come away bolstered from his sessions with top UFC contender Cain Velasquez along with fellow Strikeforce standout Daniel Cormier.

"Before, I didn't know where my level was, but I've been training with different people, I've got different people coming in and different camps that I'm going to. Of late I trained with Cain, regarded as one of the best heavyweights right now, and Cormier and some other heavyweights. My level is really high. I'm really confident of where it is. After this fight, if it goes where I hope it goes, I'm going straight to the top. I know where my abilities are."

Lashley, though, would seemingly need at least two or three convincing wins to put him in the Strikeforce title picture. Since heavyweight is a relatively deep division for the organization, which features established names like champ Alistair Overeem, Russian legend Fedor Emelianenko and Brazilians Fabricio Werdum and Antonio "Bigfoot" Silva, as well as upstarts Shane Del Rosario and Lavar Johnson, there are many names he'd have to leapfrog to get that shot he craves.

Meanwhile, Strikeforce CEO Scott Coker today told MMA Fighting's Ariel Helwani during the MMA Hour that the company was still considering matching Lashley against former professional wrestling star Dave Batista, if and when the company finalizes a deal with him to make his MMA debut.

While that would seem to put Lashley's stated career goals at odds with Strikeforce's possible plans, Coker told MMA Fighting that everything will be re-evaluated in time.

"The thing with Batista, like I told Ariel, is that we don't have an agreement with him," he said. "It would be a fun fight to do. Bobby's made the crossover, he's at a serious MMA gym and he's taking his career seriously. Right now he's moving up, if he can climb to the top 10 or 15, if he can win a couple more he'll be right there."

"If you keep winning, you'll get your title shot," Coker added at another point. "If Bobby keeps winning, he'll get it. This will be a good test in two weeks."

Lashley sounded supremely confident that test would be passed, saying that his striking is better than people think, and that no one can stop his takedowns. Though noting that it was likely that Griggs was underrated as opponent, Lashley didn't hide the fact that his sights are already set into the future.