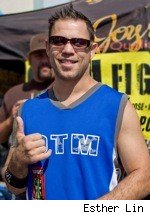 Gabe Ruediger's long road back to the UFC is finally complete.

The controversial cast member on the fifth season of The Ultimate Fighter, who failed to make weight on the show for his fight against Corey Hill after being seen eating ice cream cake and getting a colonic and was then subsequently kicked out of the house by Dana White, has agreed to step in on short notice to fight Joe Lauzon at UFC 118 on Aug. 28, MMA Fighting has learned.

The spot opened up for Ruediger after Terry Etim was forced to pull out of the fight due to a broken rib injury.

Since the airing of of the show in 2007, Ruediger (17-5) is 7-2, including winning his last six fights in a row. The former WEC lightweight champion had previously fought once inside the Octagon, losing to Melvin Guillard via 2nd round TKO at UFC 63.

Lauzon (18-6), who will be fighting in his home state of Massachusetts, is coming off a loss to Sam Stout at UFC 108. He was a cast member with Ruediger on TUF 5.

Lauzon vs. Ruediger is still expected to air on the Spike TV prelims.