Dana White: Chael Sonnen Believes Everything That He Says 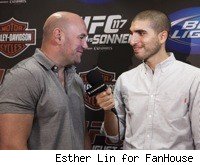 Chael Sonnen's way of hyping his fight against Anderson Silva, whether Sonnen has crossed the line, his relationship with Silva, the current welterweight title picture, his newfound respect for Roy Nelson, Zuffa's pending lawsuit against Bellator and Ken Pavia and MC Hammer's arrival to the MMA management world.