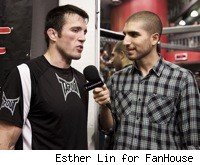 Sonnen talked about the criticism he has laid on Silva in the months leading up to the fight and his mind set going into the most important fight of his life. Sonnen also denied ever discussing Lance Armstrong in a recent interview with Pro MMA Radio.