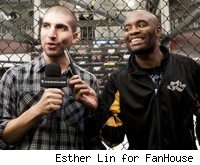 The middleweight champion was all smiles as he talked about his preparation for his title fight against Chael Sonnen, whether Sonnen's criticism of him as affected him in any way and what his primary motivation is going into this fight.