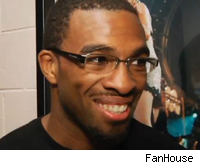 A knee injury has forced surging Italian striker Alessio Sakara off the UFC 118 card, and the UFC middleweight who was scheduled to fight Gerald Harris is likely to be replaced by returning Joe Vedepo.

A source with knowledge of the situation informed MMA Fighting of the change.

Sakara had originally been scheduled to face Jorge Rivera, who himself had to withdraw from the event after breaking his arm. Harris replaced Rivera, and now Harris will likely face a replacement fighter himself.

The source said that the fight has not yet officially been signed, but that both fighters have been offered the fight and verbally agreed.

Harris (17-2) had one of the signature moments of July's UFC 116, knocking out Dave Branch with a thundering slam in the third round of their bout. The KO made ESPN SportsCenter's plays of the week as a result.

Harris is 3-0 in the UFC, also beating Mario Miranda and John Salter. All three of his victories have come by way of knockout.

It will be a second run in the UFC for Vedepo, who is 11-3 overall but went 0-2 in his first UFC stint from 2008-09, losing to the aforementioned Sakara as well as Rob Kimmons.

Since then, however, he's won four straight fights to earn a second chance on the sport's biggest stage.

UFC 118 takes place on Aug. 28 from the TD Garden in Boston. It will mark the organization's first time running an event in Massachusetts since the state sanctioned the sport.