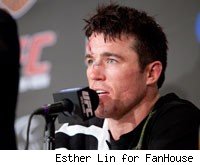 To hype his UFC middleweight title fight with Anderson Silva, Chael Sonnen has employed a simple strategy: Say as many outrageous things about Silva as he can think of.

But as Saturday night's fight draws closer, Sonnen isn't satisfied with just taking on Silva. He has now decided to verbally attack Lance Armstrong, suggesting in an interview that Armstrong's cancer was caused by the use of performance-enhancing drugs, and that Armstrong's support of cancer research has been nothing more than an elaborate fraud.

"Lance Armstrong did a number of things and he gave himself cancer," Sonnen said on Pro MMA Radio, as transcribed by MMA Mania. "He cheated, he did drugs, and he gave himself cancer. Well, instead of saying 'Hey listen, I cheated and gave myself cancer, don't be like me,' he actually made himself the victim and then went out and profited something like $15 million from this 'Hey, poor me, let's find a cure for cancer' campaign instead of just coming clean and saying, 'Look, here's what I did, I screwed myself up, and I hope people learn from my mistakes.'"

More: UFC 117 Fight Card | UFC 117 Pictures | UFC 117 Results
Sonnen was answering a question about the type of people who bother him, and he seemed to be suggesting that Armstrong is the same kind of phony that Sonnen says Silva, the UFC middleweight champion, is. For good measure, Sonnen threw in that he thinks Michael Phelps is a "pothead" as well, and Sonnen generally seems to think that he deserves to be considered America's one authentic sports star.