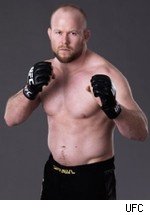 Often times, fighters talk up of a new version of themselves after time away. Here, light heavyweight Tim Boetsch says fans can still expect at UFC 117 the same fighter they've seen in the past.

"I made some changes, but I'm still the 'Barbarian,'" Boetsch recently told MMAFighting.com. "I'm still looking to finish everyone in my fights. I'm still going to slam people every chance I can. The biggest change for me has been my mental focus and my determination. I'm much stronger in what I need to do."

Living up to his "Barbarian" nickname, Boetsch will also pick the same walkout tune, the theme song to "Conan the Barbarian."

Although Boetsch won three straight fights the past year, his real reward for the trifecta will be cashed in on Saturday when he makes a return to the Octagon after a year-long UFC absence .

"It's always good to be on a roll and keep that win streak alive," he said. "I knew when I got cut from the UFC, that's what just part of what I had to do to get back, cause I ultimately felt I belonged in the UFC."

When the UFC releases a fighter from his contract, the door often times remains open as long as the fighter can string together wins in smaller shows. During his time away, Boetsch, whose last UFC appearance was a loss to Jason Brilz at UFC 96 in March 2009, improved his record to 11-3 with finishes over Aaron Stark, Rudy Lindsey and Reese Shaner.

At UFC 117, Boetsch will eye his fourth straight victory in a fight against late replacement Todd Brown, who steps in place of the injured Thiago Silva.

"I definitely still want to go in and put on a good show and beat [Brown] and then hopefully Thiago's back is feeling better and I can get that fight lined up again as potentially my next fight."