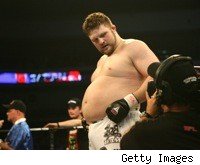 If you're expecting Roy Nelson to be bowled over by how quickly he went from reality show winner to potential No. 1 heavyweight contender, you can stop right now.

Even though a win over highly touted Brazilian striker Junior dos Santos at UFC 117 this weekend would likely net him a title shot, and less than a year after winning season 10 of "The Ultimate Fighter," Nelson isn't in awe of how quickly things have progressed.

"It's a little bit slower than I'd like, actually," he told MMA Fighting. "Usually I'd like to fight for the belt a little bit sooner, but I'll take it."

As is so often the case when interviewing "Big Country," it's a response that only raises more questions. Questions like, is he serious?

It's the same when you ask him about his preparation for dos Santos. Before taking on 6'11" Stefan Struve in March he claimed that he'd been getting ready by playing a lot of basketball. This time, to prepare for the fierce Brazilian striker, he jokes about trying some other methods.
People might not realize it, but he's a stud. I think he's probably the No. 1 guy out there by far.
-- Nelson on Dos Santos
"I'm pretty much doing the same, usual stuff with my usual guys. Sometimes we'll go out and put some meat on my a-- and let some jaguars go to see if I can outrun them, that kind of stuff. You know, normal training stuff."

But as much as he likes to kid around, Nelson knows that dos Santos is serious business. He's a big, powerful, ferocious knockout artist who has torn through the UFC heavyweight ranks, smashing veteran opponents such as Fabricio Werdum, Mirko "Cro Cop" Filipovic, and Gabriel Gonzaga, among others.

"I'm glad to be fighting Junior dos Santos," said Nelson. "People might not realize it, but he's a stud. I think he's probably the No. 1 guy out there by far."

In fact, Nelson said, the fight with dos Santos holds almost as much allure as the title fight he'll earn if he can get past him. In part, that's because Nelson has so much respect for what dos Santos can do. It's also because he's not entirely impressed with the rest of the UFC's heavyweight division.

For instance, take UFC heavyweight champ Brock Lesnar and his most recent challenger, Shane Carwin. Nelson watched that fight closely and "learned a lot about" each man, he said.

"Carwin, he seems like he trains for five, one-minute rounds. That's his championship fight, apparently," said Nelson. "But no, you learn a lot. Like Carwin, he quits. He basically quit with Brock and he tapped out. That means you quit. It's pretty self-explanatory. Then Brock, you learned that if you don't give him an opportunity to come back on you, if you don't give him that hole to come back, he won't come back. Shane just gave him the chance to come back. He didn't put him away."

Carwin's fatigue, which he attributed to lactic acidosis, serves as just one more sign to the more rotund Nelson that the monstrous physiques of his peers aren't necessarily all they're cracked up to be.

"I mean, look at him. All that muscle to feed oxygen to, of course he gets tired. You have all that muscle on you, you're going to get tired. That's why I prefer to be fat."

Again, is he serious? Or is this just Roy having a bit of fun with us, mocking the obsession with his physique while playing to it at the same time? With "Big Country," you can never be quite sure.

All we really know is that the one thing he's not joking about is the man who will be standing in front of him in Oakland on Saturday night. When it comes to dos Santos' skills, Nelson is as serious as he ever gets. To hear him tell it, he's also as ready as he's ever been.