UFC on Versus Preview and Predictions 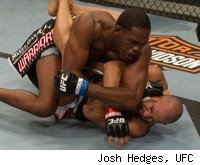 A slow July for mixed martial arts has finally passed, and now August is finally upon us, a month so jam-packed with MMA action that it will be hard to keep up with it all. First up is UFC Live on Versus 2, a solid fight card on basic cable with Jon Jones taking on Vladimir Matyushenko in the main event. We've got the full preview and predictions below.

What: UFC Live: Jones vs. Matyushenko

When: The non-televised undercard will start around 6PM ET on Sunday, and the live Versus card starts at 9PM ET.

Preview of the four televised fights:

Jon Jones vs. Vladimir Matyushenko
Jones is one of the up-and-coming stars of the UFC, a 23-year-old who absolutely destroyed seasoned veterans Brandon Vera and Matt Hamill in his last two fights. Matyushenko is an even more seasoned veteran, and Jones calls Matyushenko the toughest opponent he's ever faced, but I don't see much reason to believe Matyushenko will have an answer for Jones' rare combination of size, strength and speed. This is a fight Jones should dominate.
Pick: Jones

Yushin Okami vs. Mark Muñoz
Munoz is a former NCAA champion wrestler who is continuing to develop into a well-rounded mixed martial artist and has looked better since moving down to 185 pounds, and as Chael Sonnen showed, a good wrestler can control Okami and grind out a decision. But I don't think Munoz is quite ready for an opponent of Okami's caliber, and I like Okami to win this fight by TKO.
Pick: Okami

John Howard vs. Jake Ellenberger
After winning his first four UFC fights, with a Fight of the Night bonus and a Knockout of the Night bonus along the way, Howard is finally getting called up to the main card. Ellenberger, a former college wrestler with big punching power, is a dangerous opponent for him, but I see Howard staying undefeated inside the Octagon.
Pick: Howard

Tyson Griffin vs. Takanori Gomi
This could be the end of the line for Gomi, the former Pride lightweight champion who was among the best pound-for-pound fighters in the world five years ago but is now 31 and no longer the explosive athlete he once was. Gomi was thoroughly dominated by Kenny Florian in his UFC debut in March, and if he loses to Griffin, he probably won't get a third UFC fight.
Pick: Griffin