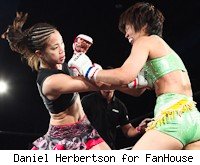 Sakura Nomura took out promotional poster girl Saori Ishioka in a one-sided grappling clinic to advance in the Jewels Lightweight GP at Shinjuku Face in Tokyo on Saturday.

Also moving to the second round of the tournament, Korean kickboxing starlet Seo Hee Ham and newcomer Ayuka Hamazaki turned in dominating performances taking out Mai Ichii and Han Sol Lee respectively, and Mika Nagano avenged her shock loss to Celine Haga with a first-round armbar after a shaky start.

For two-time All-Japan karate champion Saori Ishioka the ground has always been the weakest point of her otherwise solid game and in only her third fight 1998 All Japan University judo runner-up Sakura Nomura utterly exploited that weakness.

Nomura was careful only to spend the shortest of moments on the feet with the karateka, landing a variety of judo throws whenever the opportunity presented itself and when on the mat threatened with guillotines and armbars, keeping Ishioka on the defense for the entirety of the bout.

Although they sport very similar records, Seo Hee Ham rightly proved that she is on a completely different level to pro-wrestler Mai Ichii. Ichii's offense consisted almost solely of sidekicks and spinning backfists and for one of the the best kickboxers at the 115-pound weight limit, this was no real challenge. Ham picked her opponent her part with crisp strikes and never really broke a sweat but it was on the ground that Ham really impressed.

Ichii is far from being a respected ground technician, but Ham displayed that she has evolved a lot since her submission loss to Megumi Fujii back in 2008. Ham smoothly transitioned between submission attempts and positions and completely negated anything that Ichii attempted on the mat. Ichii resorted to attempting to pulling guard in the last round but Ham would have none of it, standing and keeping Ichii off the mat so that she could safely punch to the head within the rule set of Jewels.

Judges had no trouble awarding the Korean the decision, and with this performance, she must be considered the tournament favorite.

Jewels Rough Stone GP Champion Mika Nagano bounced back from a massive upset loss to Celine Haga in May to get revenge via a first \-round armbar. The first two minutes of the match played out like their first meeting, the Joachim Hansen trained Haga landing with her jab and right straight and reversing a Nagano takedown attempt to take mount.

Nagano quickly reclaimed half-guard and then guard and from there she was able to lock in an armbar. Haga looked to escape from the lock and move to side control, but Nagano was able to reclaim the arm and flip Haga to get the tap in the first round.

The Ayuka Hamazaki vs. Han Sol Lee was meant to provide the wild card of the tournament, and with her impressive kimura victory, Hamazaki will fill the roll well.

The Megumi Fujii protege turned in a flawless performance with a takedown into side control and the kimura only 48 seconds after the opening bell.